In keeping with my habit of making game engines rather than entire games, here’s a demo that was originally meant to be a game, but I got sidetracked by making it pretty and lost momentum. This has happened before. It’s just another step on the path to enlightenment. This post describes some of the new things I tried.

View the source on github.

I used the crate gfx to access graphics hardware. It’s a bindless wrapper around several different graphics backends. I used the opengl backend, which means I could write shaders in the opengl shader language.

The renderer keeps a single rectangle in the vertex/index buffers. Each entity in the game has an entry in an “instance buffer”, which stores information relevant for drawing that object (e.g. position, size, sprite sheet index, depth). The graphics hardware renders the geometry in the vertex/index buffers once for each entry in the index buffer. In grid-based games, and many 2D games in general, instanced rendering makes it convenient to update the rendering properties of a game entity, as all that needs to be updated is an entry in the index buffer.

I’ve experimented with dynamic lighting in roguelikes before. What’s new here is the lighting is implemented in a shader, and the effect is applied to individual pixels rather than cells. I use recursive shadowcast, to do visible/lit area detection. My recursive shadowcast implementation writes its results directly into video memory, so the shaders can use this information to know which cells need to be lit in which way. 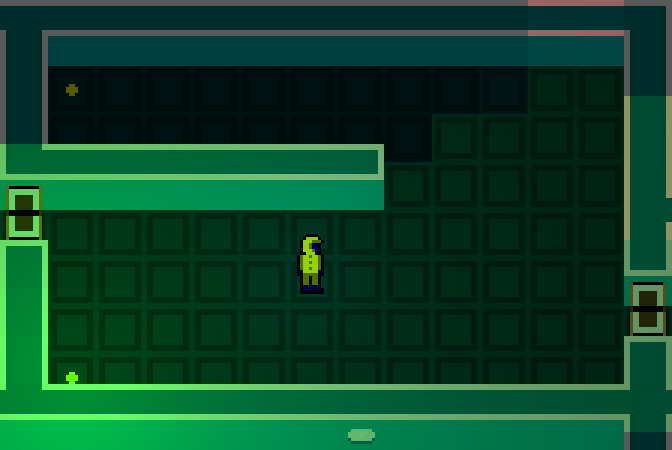 I extended recursive shadowcast to mark the edges and corners of cells as visible. This is necessary as walls can be lit by different lights from different sides, but it only makes sense to show the player the effects of lights illuminating the sides they can see. This is demonstrated in the above/below images.

In an attempt to actually finish a game, I’m applying some restrictions to my next project:

At least at first. I really enjoy writing shaders and designing renderers. So much so that when given the option, I tend to focus too much on that, and not enough on making something actually fun and complete. To prevent this, I’m going to resrict myself to making a game that runs in a terminal. If I can complete a game that I think is fun and worth pursuing further, then I’ll consider adding graphics.

I’ve been working on a rust library for making terminal UIs. (Yes I know there are already many of these!). My goal is to make it as cheap as possible to make a game idea playable. A concern I have with graphics, is if I implement a game idea, spending time and effort to make the graphics nice from the start, if the idea turns out not to be fun, I’ll have a hard time deciding to throw it out and try something else, since I will have already invested so much effort. This may cause me to continue working on bad ideas that I should have abandoned earlier.

To reduce feature creep, I’m forcing myself to design a game that has only four inputs. It’s turned out thus far to be an interesting design challenge, and I’m looking forward to implementing and play-testing some of my ideas.