Most games employ some form of visible area detection to simulate the fact that opaque objects obscure one’s view of whatever is behind them. Recursive Shadowcast is one of a handful of algorithms that compute visible area in worlds represented by 2D grids. This makes it suitable for use in roguelikes. This post will explain the recursive shadowcast algorithm. 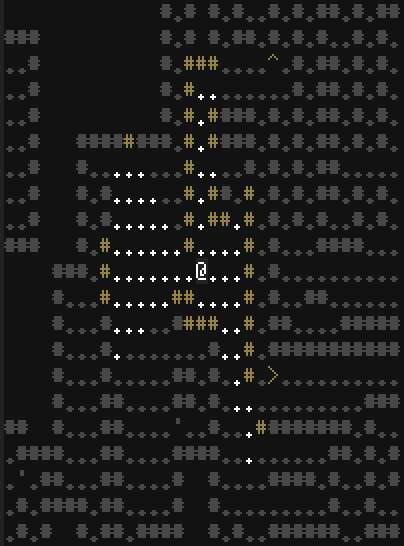 Before diving into the details, let’s get a feel for 2D grid-based visible area detection. Below is an environment that will be used throughout this post. White cells are empty and black cells are opaque walls. The scene is viewed from the cell containing the red cross. 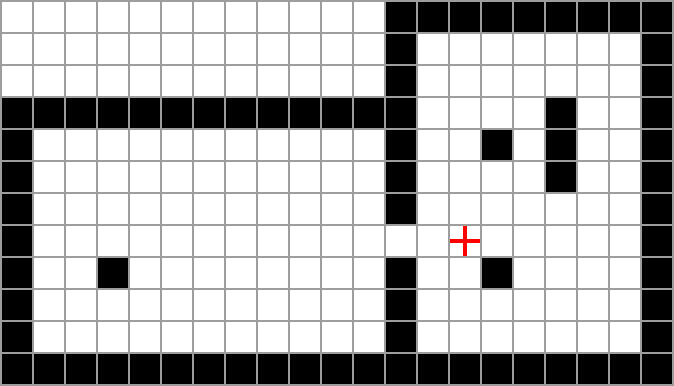 The yellow-shaded area in the image below is visible from the centre of the observer’s cell. 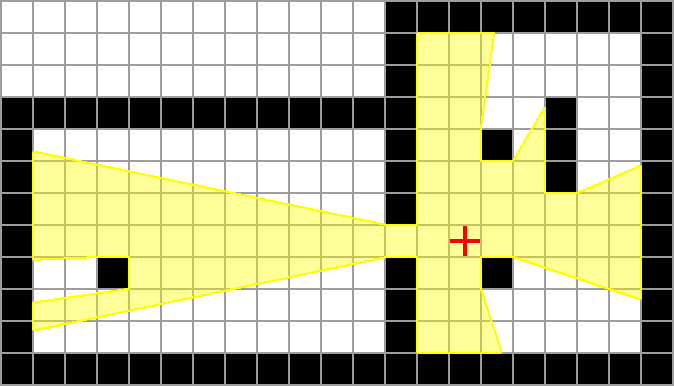 Note that some cells are partially inside the visible area. To simplify explanations, these cells will be considered to be completely visible.

The visible floor cells are shown below. 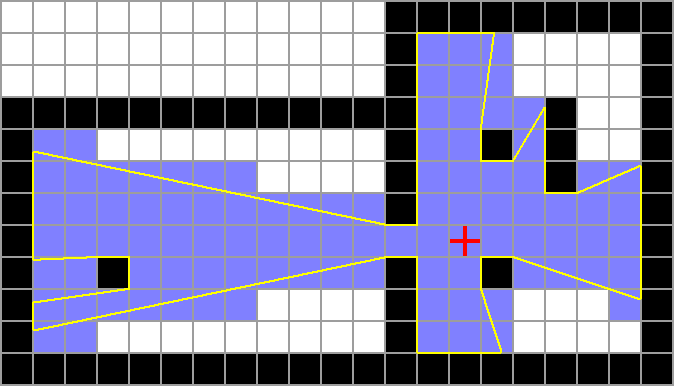 If at least one edge of a wall cell is visible, it is considered visible. Visible wall cells are shown below. 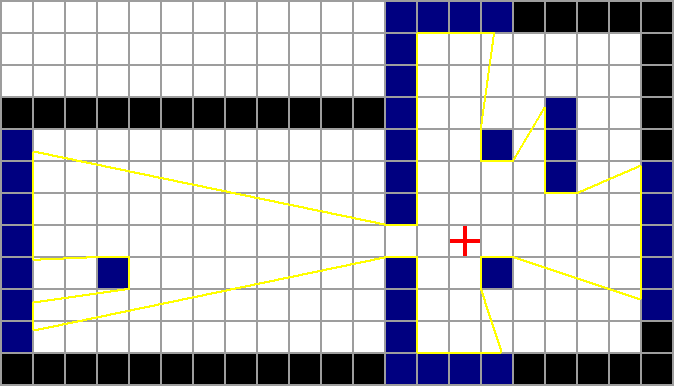 It identifies which cells in the grid are visible when viewed from the specified position.

Recursive shadowcast considers the space to be made up of 8 octants, centred at the observer. Each coloured segment in the image below is a single octant. The visible area is computed independently on each octant. 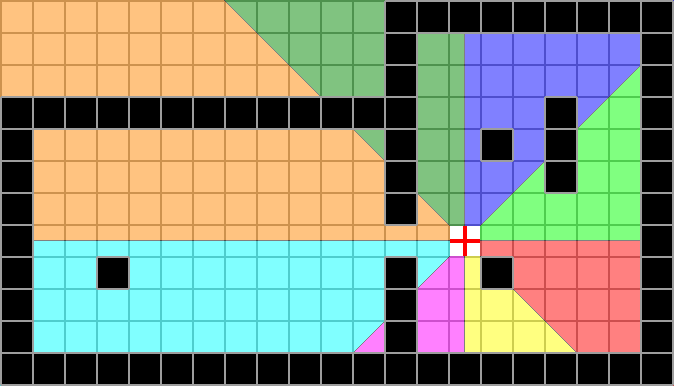 If a cell lies on the border of 2 octants, it is considered to be in both. This implies that some cells are in 2 octants. It would be trivial to keep track of which cells have been visited, and thus prevent visiting the same cell twice while processing two different octants if necessary.

To clarify the point above, shaded in blue below are all the cells in a single octant. 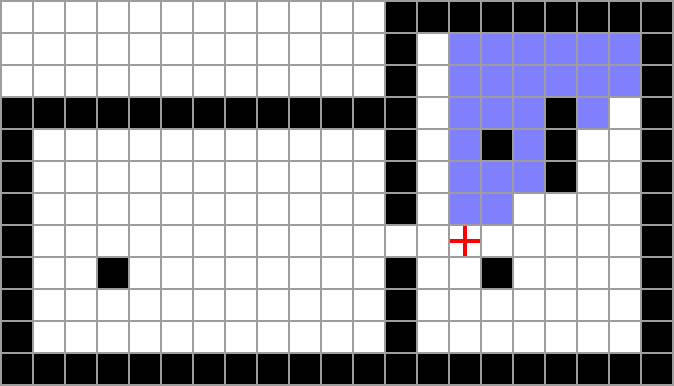 The simplest way to explain this algorithm is to jump right in with an example. We’ll first consider this octant. 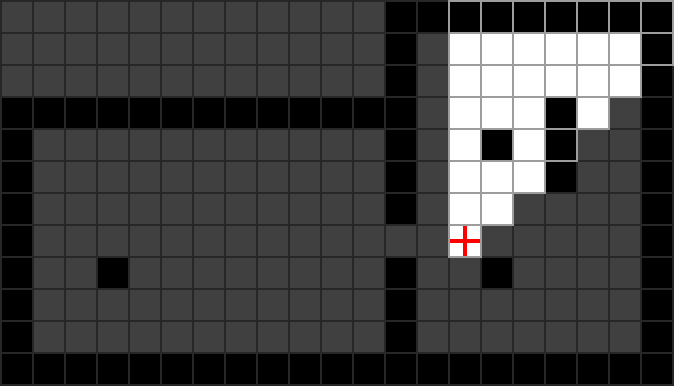 As we compute the visible area in this octant, we’ll be keeping track of a few variables:

It’s important to point out that the eye is considered to be in the centre of its cell. That is, if the eye is in cell at coordinates (2, 3), the actual absolute position of the eye would be (2.5, 3.5) (assuming (0, 0) is the coordinate of the top-left corner of the grid). 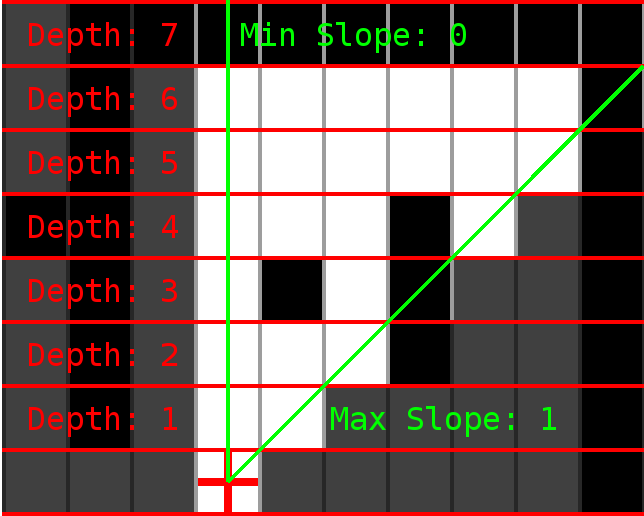 We’ll scan the current depth from west to east. Each cell that is visited is considered to be visible. If an opaque cell is encountered, recurse, incrementing the depth, and adjusting the min and max slope such that the opaque cell obscures vision at the next depth level. This process is documented more concretely in the following pseudocode.

The interesting parts of the code are labelled with A, B and C. We’ll visit each case as we work through the example octant.

Initially, the function is called with arguments: computeVisibleArea(1, 0, 1).

The scan at depth 1 (below) is simple as there are no opaque cells. The only case in the code above that we encounter here is case C. After scanning each cell, previous_cell refers to the right-most cell at this depth (since we scan from west to east), which is transparent. Thus we recurse to depth 2, leaving the min_slope and max_slope arguments unchanged as they are passed to the recursive call. 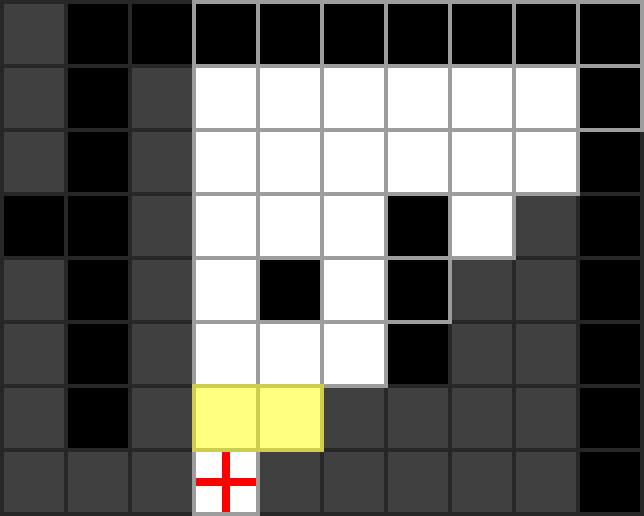 Depth 2 is the same as depth 1 in that none of the cells are visible, so we will skip it and move straight on to depth 3, which is much more interesting. Unlike the previous depths, there are 2 recursive calls made on depth 3 (represented by the green and blue pairs of lines in the image below).

Moving west to east, when the second cell at this depth is visited, the code above will hit case A, as an opaque cell is visited after a transparent cell. The value of next_max_slope for this case is the gradient of the right-most green line. Note that this line passes through the eye and the northwest corner of the second cell. The left-most green line has a gradient of min_slope (0 in this case) which was passed to this function as an argument. These two gradients are passed to the recursive call, along with an incremented depth (4).

The third cell visited at depth 3 causes the code to hit case B, as a transparent cell is visited after an opaque cell. In this case, no recursive call is made, but the value of min_slope is adjusted to be the gradient of the left-most blue line. Note that this line passes through the eye and the southwest corner of the third cell.

Unlike the previous depths, case C is not reached, as the last cell visited at this depth is not transparent. 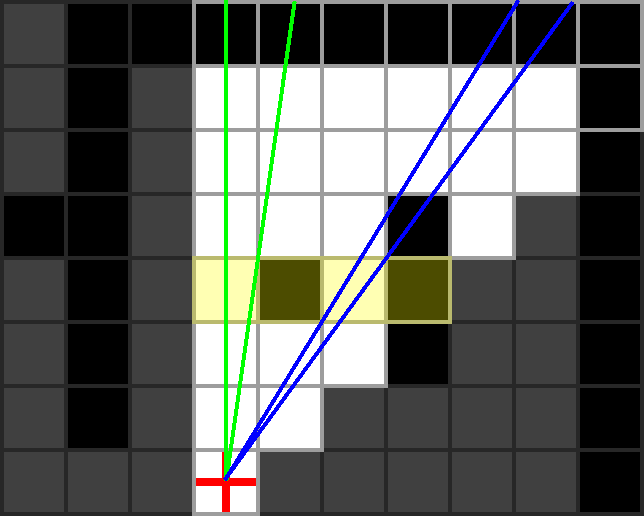 Depth 4 is reached by 2 separate recursive calls. It’s important to note here that all cells even partially inside the area between a pair of coloured lines be considered in the corresponding scan (hence the shading in the image below). The green instance is simple as there are no opaque cells. The blue instance will hit case A, though note that next_max_slope (the dotted line below) will be less than (ie. to the left of) min_slope. This means no cells could be between then. Thus the blue instance stops here. 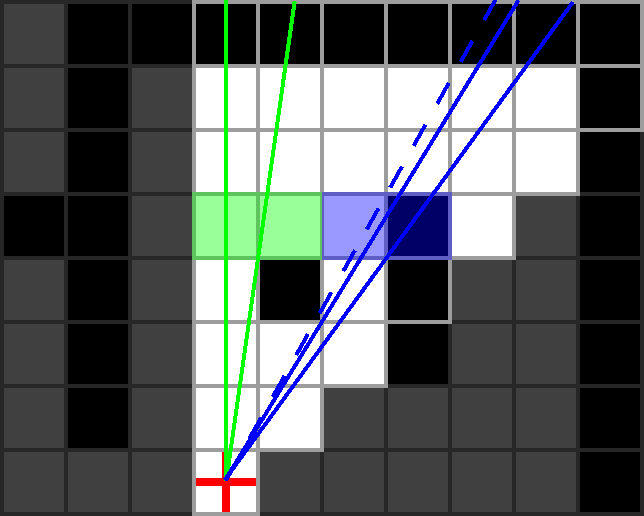 The final case to consider in this example is the very last recursion of the green instance. Shown below, this case is unique as no cells in the scan are transparent. Stepping through the code, we see that each cell is marked as visible (as normal), but neither case A, nor C are hit, meaning no recursion is made, and execution stops. 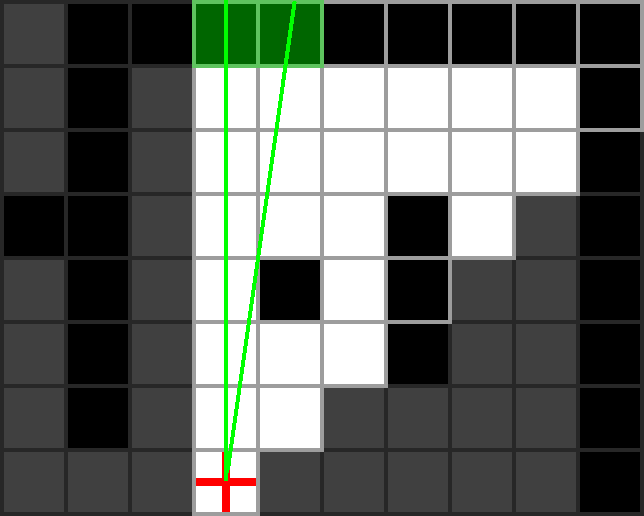 The shaded cells in the image below are all the cells marked as visible in this octant using recursive shadowcast. 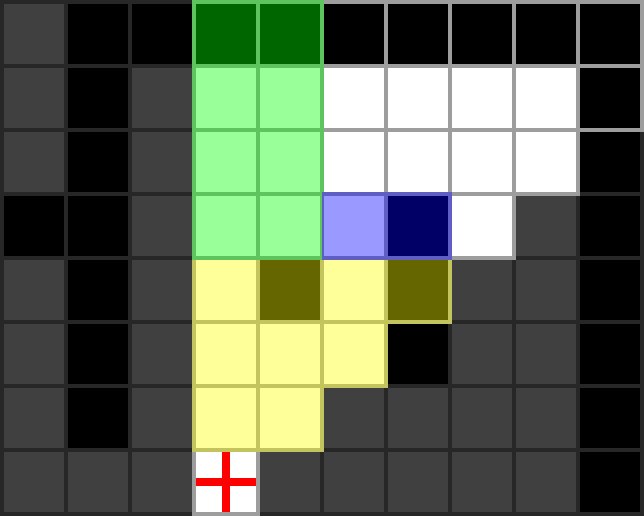 Generalizing to all Octants

The solution presented in the previous section is specific to the example octant. The following features of the algorithm are specific to that octant:

Let’s see how these characteristics change in different octants. Note that this is just one of many possible ways to represent the differences between octants. These are in no way canonical.

The image below shows the direction to move in the grid as the depth increases. In the north-most octants we move north, in the east-most we move east, and so on. 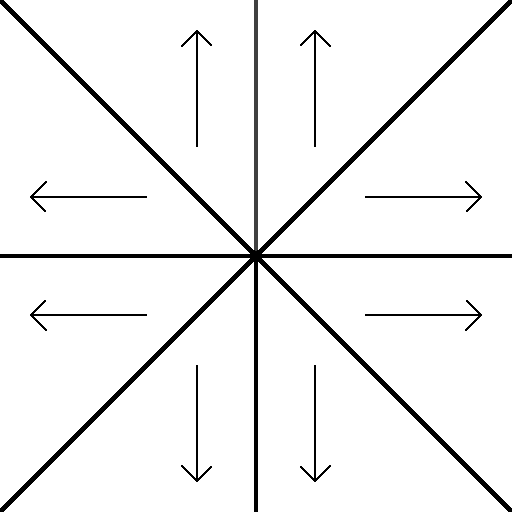 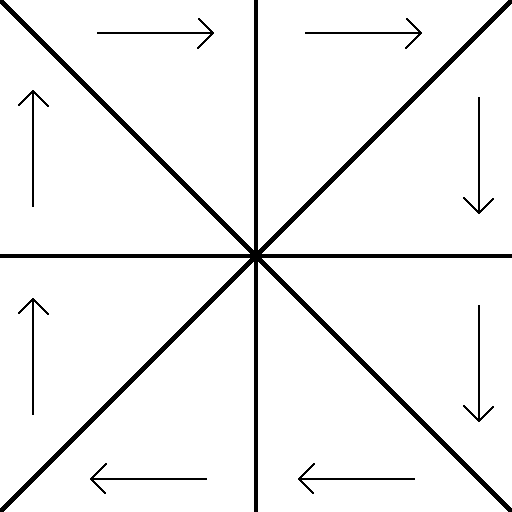 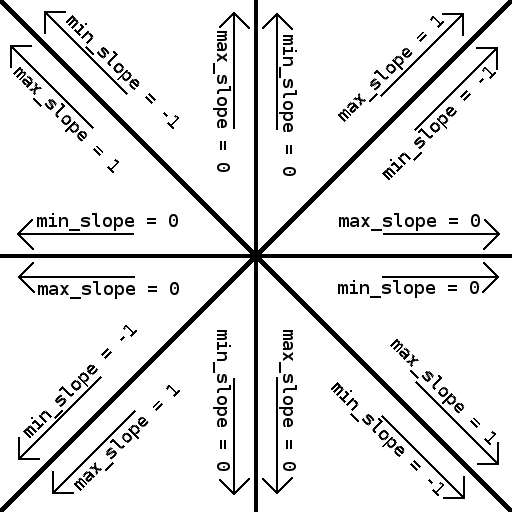 When scanning cells in the octant’s scan direction, if an opaque cell is visited after a transparent cell, we compute a new maximum depth (next_max_depth) to pass to a recursive call based on one of the corners of the opaque cell. In the previous example, that was the northwest corner. Similarly, when visiting a transparent cell after an opaque cell, the current min_slope is adjusted based on one of its corners. This is the southwest corner in the example. Which corners to choose in this cases is octant-dependent, and is shown in the diagram below. 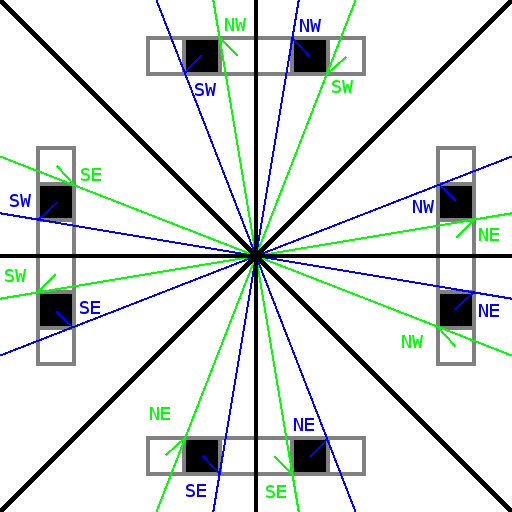 Cell corners to use for finding slopes

Many of these characteristics are related in some way, and knowledge of some can be used to derive others. Despite this, for simplicity, when computing the visible area for a given octant, let’s just pass all the characteristics as arguments:

Passing these characteristics as arguments to the recursive function is repetitive, since within an octant they never change, and recursive calls never go between octants. An alternative way of structuring this function that removes the need to pass them around, is to replace the recursion with iteration.

We’ll need a data structure representing state once represented by a recursive call. The arguments that could change with each recursive call are depth, min_slope and max_slope. Thus, our structure will look like:

Using this, and an assumed Stack data structure, the code becomes:

Another minor change is the removal of the depth argument. This is no longer needed because the function’s arguments are now just initial values, and the depth always starts at 1.

Putting it all together, we need to call computeVisibleArea once for each octant, giving it the relevant arguments for that octant. The following function does this, starting with the octant in the example above, going around clockwise.