I’m about to start working on my 7drl project for 2019: Get Well Soon. It will be a deck-building, but otherwise traditional roguelike, in the sense that the world is square grid, gameplay is turn-based, levels are procedurally generated and you have to restart if you lose. All character abilities will be activated by playing cards. The character can be upgraded by adding and removing cards from the deck.

Aesthetically, most of the abilities will be focused on ice. I’ve been thinking a lot about abilities which obstruct enemies rather than outright attacking them, and ice has some nice affordances in this respect (it blocks your path or freezes you but melts over time, it can be sharp, it’s slippery, it’s less effective in hot areas).

I’m making some chances to my normal approach. I’m working on this from Sunday to Saturday, rather than Saturday to Friday as I’ve done before. I work roughly 9-5 on weekdays, and I want to see what difference a free day at the end of the week will make. Also, the title isn’t a pun!

As always, I won’t be starting with zero code. I’ve been working on yet another lighting demo called Cherenkov, which I have long term plans to turn into a game. I’m going to keep the prototty boilerplate, build scripts, continuous deployment (travis-ci and appveyor) configs, and lighting system. Actually that’s about the entire project so far. It doesn’t even have physics - you can happily walk through walls or out of the map! 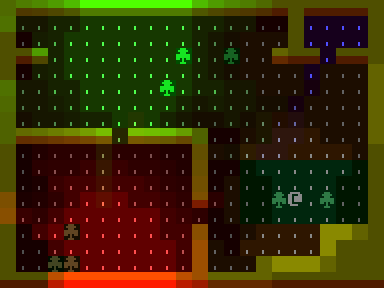 In the week leading up to the 7drl I did a lot of testing of the various “roguelike engine component” libraries which I maintain, since I’m not interested in debugging low-level engine components during the 7drl (but I’m sure I will still have to!). The 2 major bugs which I found with this testing: