The most notable change from tonight is that I turned on pathfinding for NPCs for the first time. Up until now they had been stationary, and could be injured or killed, or affected by vacuum, but could never observe the world or take actions. Enabling AI is scary because it greatly increases the amount of work the computer is doing between human turns. The vision system is now running once per NPC turn as well as the player. Then there’s the additional cost of pathfinding for each NPC. I use Dijkstra maps for pathfinding which are explained in detail on roguebasin. This post is about solving a performance problem introduced by all the extra characters.

The vision system uses the Recursive Shadowcast algorithm which I wrote about earlier. Detecting visible cells is relatively fast. The problem was what how this information was being used.

NPC pathfinding and the renderer don’t work on the canonical world representation. This game uses an ECS-based engine described in a previous post, so more concretely, AI and the renderer don’t directly access entities or components. Instead, each character maintains a representation of the world based on what they have observed. A character’s knowledge is represented by “shadow entities”, made up of “shadow components”. These were designed to be frequently updated by setting data in shadow components from “canonical” reference components without allocating any new objects. This was a technique I learnt while solving performance problems in a game I wrote earlier.

At the start of a character’s turn, the vision system runs and updates that character’s knowledge of the world by updating shadow components. It was this knowledge updating process that was taking up most of the time. Knowledge is updated in the following way. It relies on a spacial hash of entities, and an analogous spacial hash of shadow entities in the knowledge representation of characters.

Knowledge cells re-use shadow entities and shadow components to prevent invoking the allocator on each cell that is seen. Despite this, this process was still taking too long. A key insight for optimization was that most entities in most cells don’t change most of the time. The only time a knowledge cell needs to be updated is when an entity has entered or left the corresponding canonical cell, or an entity in the cell changes in a “knowable” way (ie. a way that will be represented in a character’s knowledge).

With this in mind, the loop becomes:

I’ve updated the level generator to include windows and NPCs. It also places the player in a sane starting position, and determines a sane goal position (though there currently isn’t anything there). 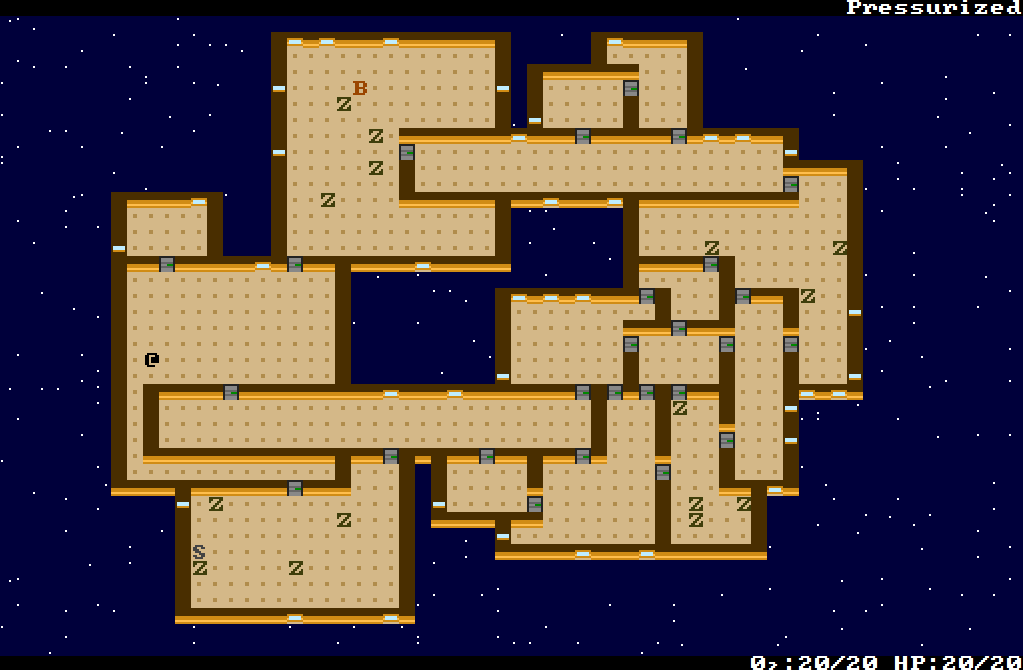 Still to do is adding items (weapons and healthkits), and stairs. I still haven’t decided how the game will end, though the current plan is to have some emergency beacon that needs to be activated before the ship-full-of-zombies arrives in a populated area.