Games on the Nintendo Entertainment System play audio using a handful of tools within the device’s Audio Processing Unit (APU). The Delta Modulation Channel (DMC) is the most expressive such tool as it can play arbitrary audio data. Any sound you’ve heard come out of a NES other than variations on square and triangle waves, and noise, was played using the DMC.

As its name suggests, the DMC can play delta modulated audio data, where a signal is represented by a sequence of relative changes rather than a sequence of samples. The DMC also exposes a register that allows audio samples to be written directly to its output, and that’s what this post will be about.

This post is aimed at people looking to write programs to play audio on the NES, or write an emulator for the NES’s APU. I found the DMC documentation on the NesDev wiki great for low-level technical details but after reading it I felt I had little intuition for what to expect when actually using the DMC, so I did some experiments which I will share.

Mental model for working with audio

This is my working model for the basics of digital audio. 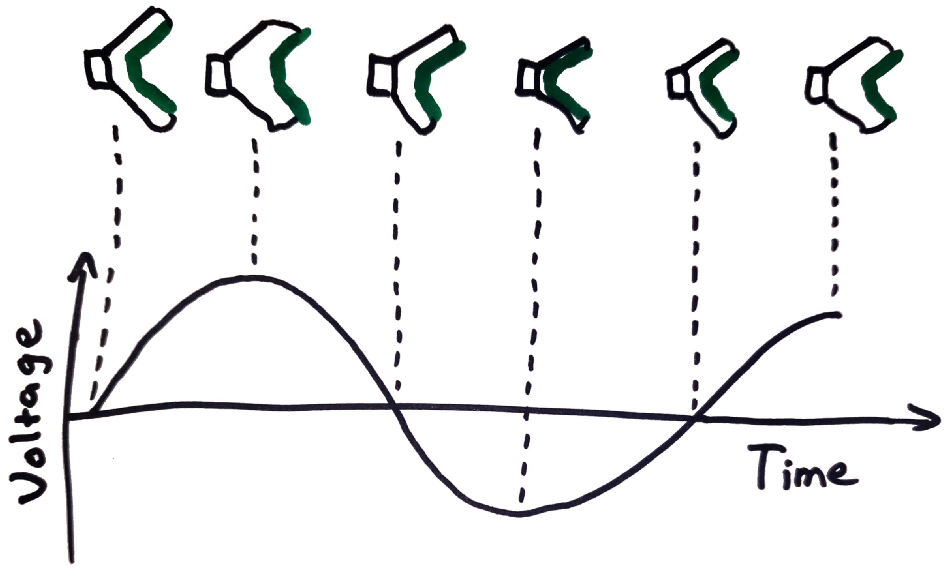 In digital audio, a signal is represented by a series of discrete values, each corresponding to a diaphragm displacement at a specific point in time. These values are called “samples”, and are often represented by 16 or 32 bit integers, or floating points. Samples are recorded at fixed time intervals, and the rate at which they are recorded is the “sample rate”, measured in hertz. A common sample rate is 44.1kHz. 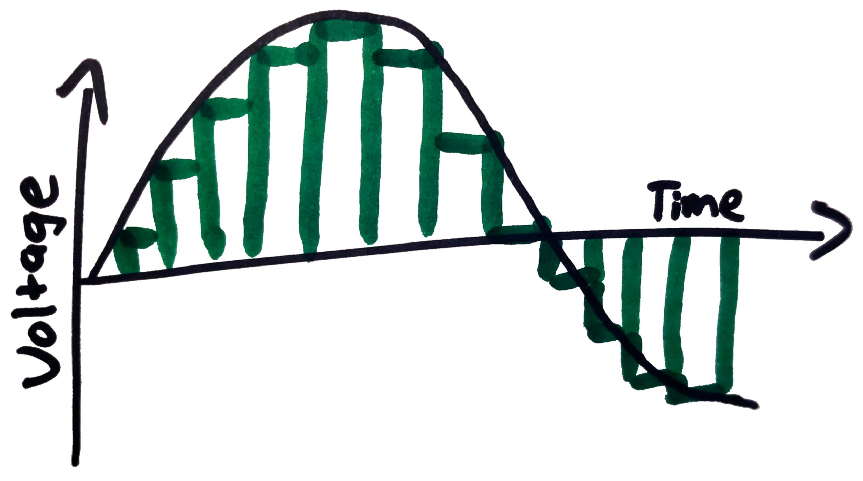 Representing a signal digitally results in loss of quality. Two reasons for this:

(In practice this would be more complicated. For example in the NES, the DMC’s digital output is combined with the output of other audio channels by a mixer which contains a DAC. The analog signal from the mixer is sent to the TV attached to the NES which probably contains an amplifier which adjusts the analog signal to a voltage range appropriate for the TV’s speakers.) 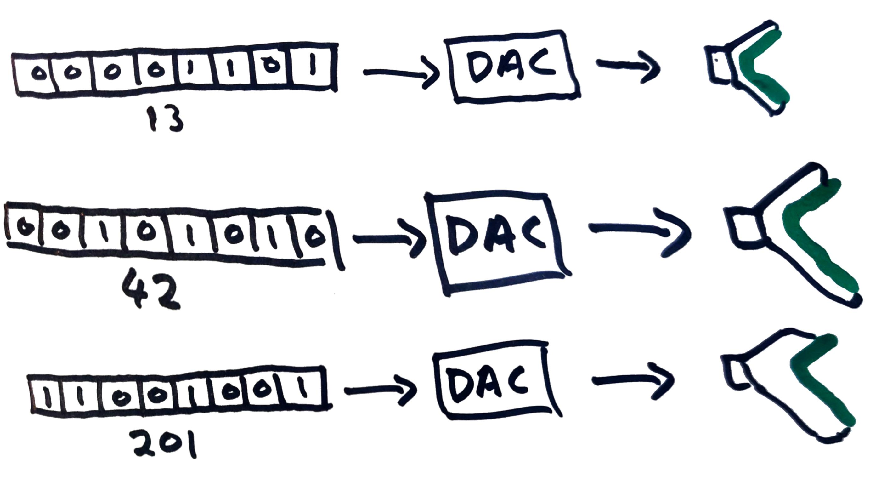 Earlier we saw that varying the voltage applied to the speaker causes its diaphragm to vibrate and produce sound. In a digital system we can similarly vary the value of the sample sent to the DAC to produce sound in much the same way. The remainder of this post will describe some experiments I did to better understand how to play sound on the NES by directly writing the digital value sent from the DMC to the mixer (which includes a DAC).

Let’s get the NES to play a sine wave at 440Hz which is the frequency of the note A above middle C. This program will work by repeatedly setting the DMC’s “direct load” register which is mapped to the memory address 0x4011. There’s no easy way to get the NES itself to generate a sine wave, so instead I’ll programatically generate the instructions to set the direct load register to a sequence of values approximating a sine wave. The generated NES program will repeatedly execute the following pair of instructions:

Before we can generate the sequence of samples we need to work out the sample rate. This is the rate at which we will be setting the DMC direct load register. The processor in the NTSC version of the NES runs at 1.79MHz (ie. 1,790,000 cycles per second). The LDA(Immediate) instruction takes 2 cycles and the STA(Absolute) instruction takes 4 cycles so the repeated pair of instructions will take 6 cycles. This gives us a sampling rate of 1,790,000 / 6 ≈ 298,333.33 samples per second. This is a far higher sampling rate than is necessary to accurately produce a 440Hz sine wave. As the sampling rate goes up, so too does the number of samples over a fixed period. We have to store all the samples in ROM, which could cause us problems as memory is limited in the NES.

I’ve written before about using Rust as a macro language for NES assembly programming. Here is some Rust code that generates the sequence of instructions that plays a 440Hz sine wave by setting the DMC’s load register:

If you’re attempting to reproduce this result, be sure to enable the DMC channel via the APU’s status register (0x4015):

Looking at the generated instructions:

We can see that it starts with a value of 63 which is right in the middle of 0 and 127 (the max 7-bit value), which corresponds to a signed value of 0 quantized into a 7-bit unsigned integer.

I ran the generated program in an emulator, recorded my desktop audio with OBS and opened the result in Audacity: 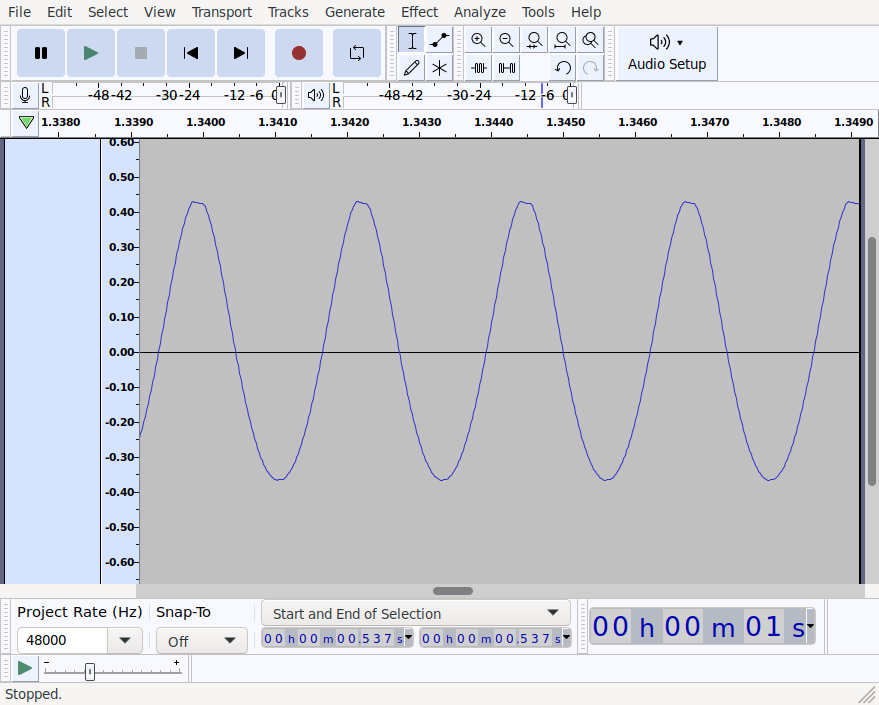 Clearly it is playing a sine wave. Switching to Audacity’s spectrogram view we can check the frequency of the wave: 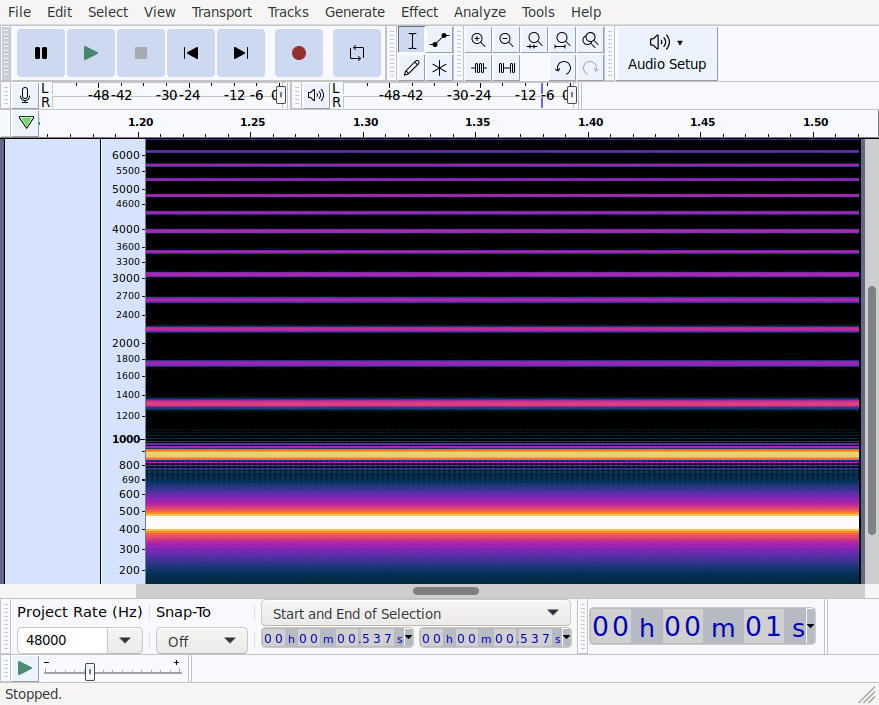 There’s clearly a strong signal at around 440Hz. The weaker lines at every multiple of 440Hz is due to the signal not being a perfect sine wave. Taking another look at the first screenshot the waveform is clearly slightly misshaped (e.g. the top is asymmetrical).

Playing the song from Rainbow Road on the N64

Now instead of generating samples programmatically let’s take an existing song and play a short segment of it on a NES by repeatedly setting the DMC load register. We’ll use the song from the Rainbow Road stage of Mario Kart 64. It can be downloaded here. 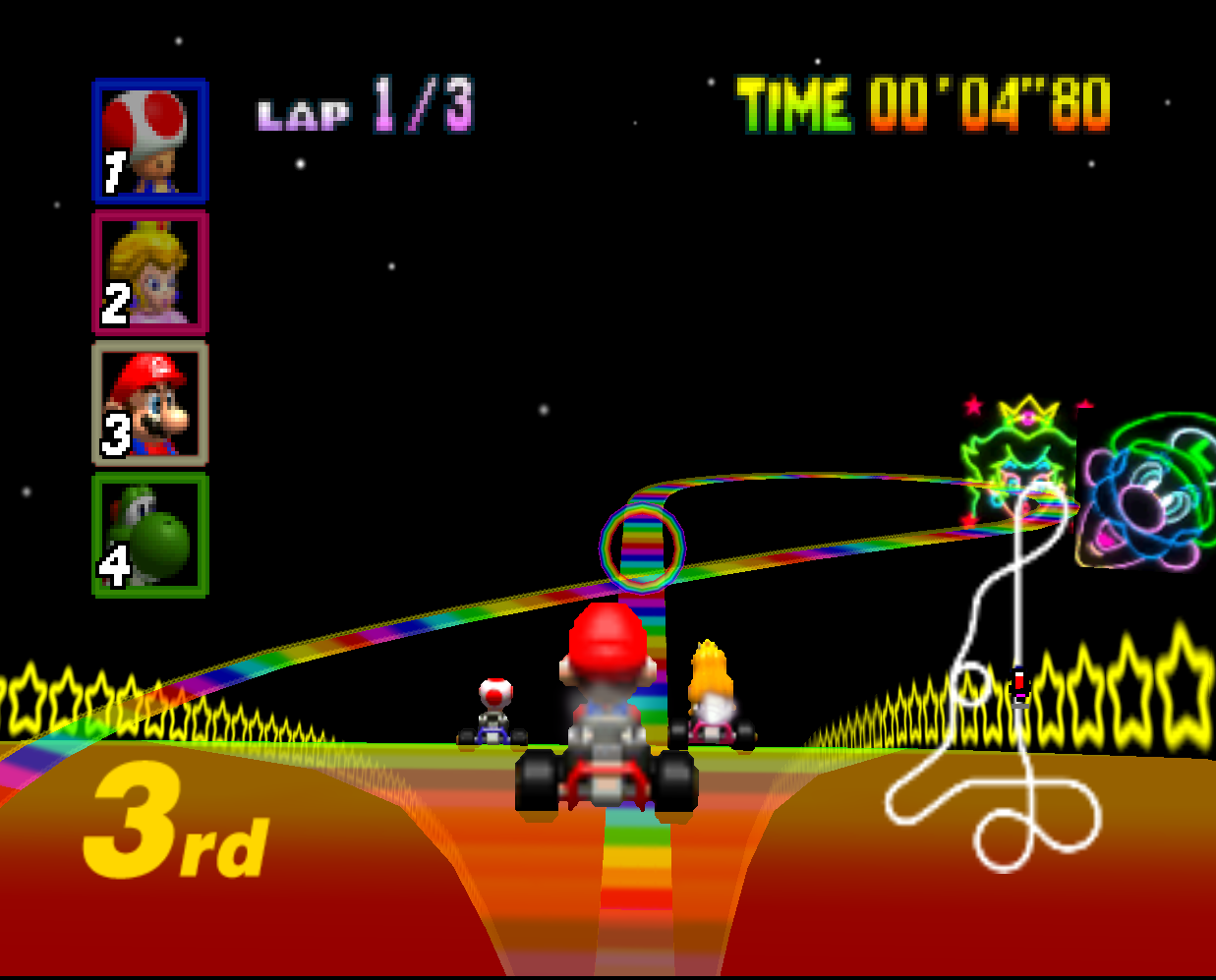 Playing this file in mplayer, one of its log messages is:

The program which plays a sine wave combined the code for loading samples with the sample values themselves. This simplified the program but required us to store 5 bytes for each sample. This time around we will save memory by storing the entire sample as contiguous bytes in ROM, and writing a small program which reads each byte in order and writes it to the DMC load register.

Simple NES cartridges (NROM) have 32kb of ROM for storage of code and static data, and an additional 8kb of ROM for storage of tile data. We don’t care about graphics so we can use the tile ROM for storing additional audio samples. This memory is accessed through the PPU (Picture Processing Unit) but it’s still convenient and fast to read so the fact that it’s not directly addressable won’t be an issue. The program that plays audio samples will be negligibly small, so we’re left with about 40kb of ROM for storing audio data. With a sample rate of 48kHz we can only fit about (48 * 1024) / 40,000 ≈ 0.85 seconds of the song in memory.

After some trial and error I found a ~13.33 second phrase which sounds ok when downsampled to 3kHz. Here it is at its original sample rate of 48kHz:

And here is how it sounds resampled at 3kHz:

Obviously it doesn’t sound as good, but the melody can still be heard. Compare this the same downsampling applied to a different section of the song with a higher melody. Here’s a section at the original sample rate:

And the same section at 3kHz:

Some of the high notes are no longer audible at all. This is because downsampling audio has the effect of lowering the maximum frequency which can be represented, and in this case, it’s lowered below the frequency of these notes so they are simply removed.

So now to assemble a ROM which plays the selected ~13 seconds from the song. I ended up encoding the downsampled section of song as a wav file and using the Rust library hound to decode the samples. Then I quantized each sample into the range 0..=127 to make them suitable for use with the NES’s DMC. This code isn’t particularly interesting so I won’t show it here.

The first 8192 samples are then copied into “CHR ROM”, or tile memory, which will get packed into the ROM directly (really just an .ines file - I can’t make real NES cartridges and I don’t even own a NES). The “PRG ROM” - the memory used to store code and static data - requires some more work to get right. Here is some Rust code which sets up PRG ROM with a program that plays audio data, followed by the audio data itself.

The code is on github. It requires you to downsample its input first, and the offset into the song of the section to place in the ROM is hard-coded.

Here’s how one might use it. Clone the repo and checkout the rainbow-road branch. Then run:

Here’s how it sounds:

That sounds even worse than the original 3kHz version, but the melody is still clearly audible. One explanation for this is the fact that each sample has been quantized into 7-bit integers. We can see the effects of this by examining the waveform in audacity:

The step shape of this wave form is the result of samples losing precision when being converted to 7 bit integers.

We could improve the quality by increasing the sample rate but this would shorten the length of the song we can store. Some ways we could increase this limit:

Games tended not to use the DMC load register for most of their music, instead opting to use delta encoded audio. The DMC could read the sample deltas out of memory in the background while the CPU did other things. In this simple example it was easy to feed samples to the DMC load register at the correct times, but if we were trying to juggle loading the DMC with also updating graphics and reading controller input it would quickly get out of hand. Also as we saw, storing raw audio samples takes up a lot of memory relative to the tiny amount of ROM available on the NES. Delta-encoded audio data is much more space efficient.

The info I used to get started programming the NES DMC:

One final thing just for fun. Since we’re using tile ROM to store audio data, you might be wondering what the resulting “tiles” look like. The fceux NES emulator has a PPU viewer which can be used to inspect tile data. I had to manually set the palette colours, and then the tiles were clearly visible: