This post describes an algorithm for evenly spreading out a sequence of items made up of two distinct types of item. I came up with it when attempting to draw straight lines on a grid, where lines are represented by discrete steps in one of two directions. In order for such a line to appear straight, the steps in one direction should be spread out as much as possible with respect to the steps in the other direction. The solution generalizes to spreading out any sequence made up of two distinct types of item that are repeated a number of times. 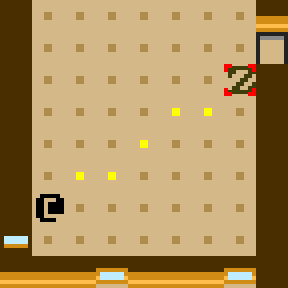 Straight line from @ to Z, made up of steps to the east and northeast 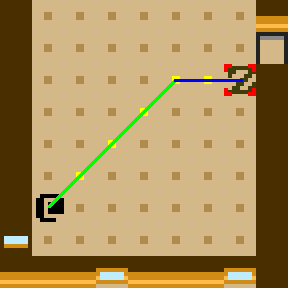 Splitting the line into its cardinal and ordinal components 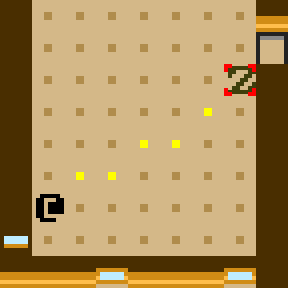 First attempt at a straight line

The sequence of steps in the image above is: ⇗⇒⇗⇒⇗⇗. A close look reveals a slightly longer diagonal section at the Z end of the line. So what’s missing from the definition of “as spread out as possible”? How can we make this line more straight? This sequence can be thought of as groups of ⇗ separated by ⇒. The sizes of these groups in the order they appear is: 1 1 2. What if we apply the same separation property to this sequence? There are more 1s than 2s, so no two 1s should be adjacent. Groups of 1s should be separated by individual 2s. Thus the sequence becomes: 1 2 1.

Cardinal and ordinal steps are now as spread out as possible

As spread out as possible

Let’s quantify the property that makes a sequence “as spread out as possible”. As you probably inferred from the above example, this property is recursive.

The first base case: A sequence is as spread out as possible if all its elements are homogeneous. E.g. AAAAAAAA

The second base case: A sequence is as spread out as possible if it is made up of an equal number of two distinct types of element, and the sequence alternates between elements one at a time. E.g. ABABABAB

This algorithm takes as input a pair of elements a and b, and non-negative integers na and nb, and returns a sequence containing na copies of a, and nb copies of b, that is as spread out as possible. The core idea is to figure out the group sizes and how many groups of each size will be present in the output, then recur with the group sizes and number of each group size as arguments. The result will be a sequence of group sizes that is as spread out as possible, that can then be used to construct a spread out list of elements.

Let’s work out the worst case execution time in terms of the value of n == na + nb (ie. the total length of the requested sequence).

If we ignore the recursion for a second (pretend any recursive calls are instant), this algorithm includes a single loop, which iterates exactly n times as it builds up the result sequence. Thus the complexity of the algorithm ignoring recursive calls is linear.

When we recur, the length of the requested sequence is numSmallGroups + numLargeGroups == numGroups == nb + 1. Recall that in the non-trivial case, nb is strictly less than na. Thus, nb + 1 is at most n / 2.