A cellular automata is a collection of cells whose states change over time based on the states of adjacent cells. They can be used to produce natural-looking patterns, such as the cave in the picture below. 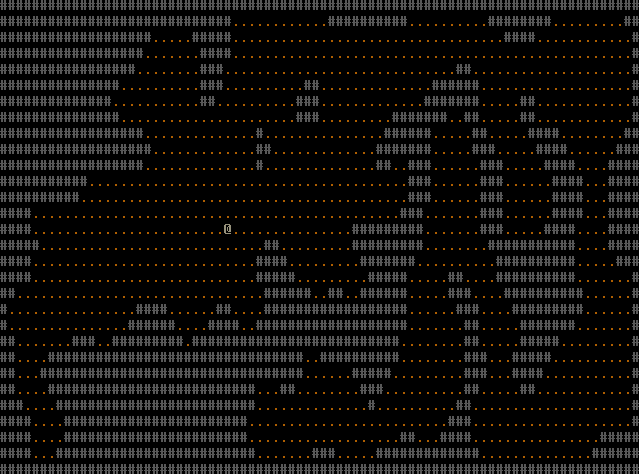 Perhaps the most well-known instance of a cellular automata is Conway’s Game of Life, shown below (click to start). Each cell is considered to be either alive or dead. In this example, the initial states of each cell is random. At each step, the neighbours of each cell are examined to determine if that cell will be alive or dead in the next step. This proceeds according to the following rules:

Here’s pseudocode for the function applied at each step of the simulation. In short, it takes a 2D array of cells and updates the state of each cell based on the states of its neighbours.

Notice the four constants at the start of the code. These encode the rules for Conway’s game of life, described above. These values can be changed to obtain different behaviour of the cellular automata.

The constants that encode these rules are:

Variant of Conway's game of life used for cave generation.

These set of rules creates large clumps of living cells which can be used as the walls of a cave. When generating terrain for a game level of finite size, players shouldn’t be able to walk off the edge of the map. A simple way to enforce this is to place walls around the edge of the map. A solution that places natural-looking walls around the outside of the map is to ensure the border of the area is always made up of living cells. Enforcing this at each step of the simulation means that these cells cause other nearby cells to become (and stay) alive. The walls grow inwards and interact with interior walls to give the appearance of natural cavern walls.

Cells around border are always alive.

Within the first few steps, natural-looking caverns are generated. In the subsequent steps, the walls recede and the caverns become very vast. Limiting the number of steps to 4 seems to produce interesting-looking caves. Rough edges and single dead cells can be smoothed/removed by killing any cells with less than 2 living neighbours, and resurrecting cells with more than 5 living neighbours. Finally, to ensure that there are no closed-off sections of the generated cave, all but the largest contiguous groups of dead cells are are resurrected, filling in closed-off open spaces.

Running for 4 steps, then cleaning.