Firstly, here’s a screenshot of my first organic encounter with the final level of Orbital Decay: 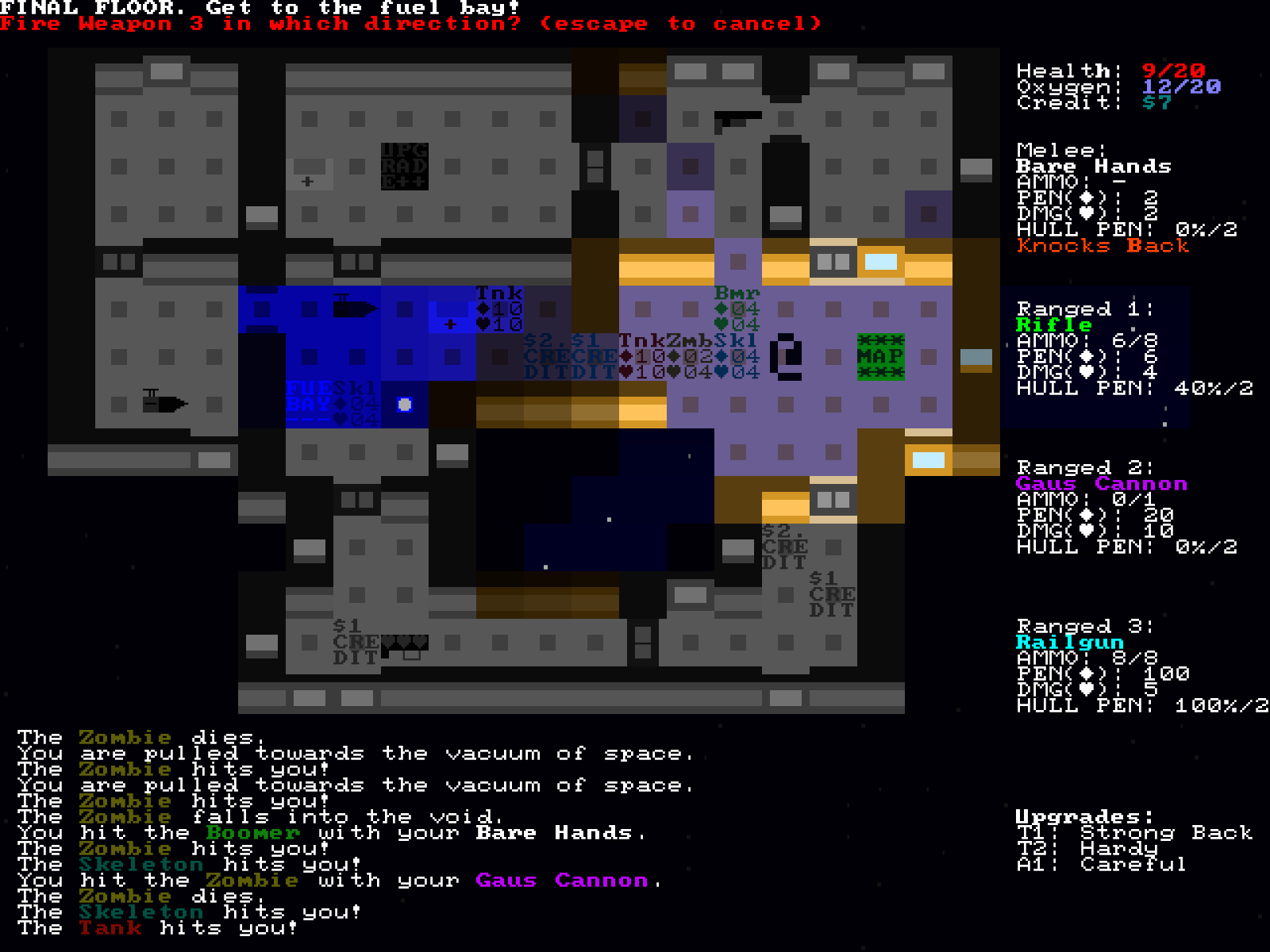 Last year I added gamepad input to chargrid, and used slime99 as a test bed, so basic controller support was incidentally already present. I just needed to add additional inputs for the actions specific to this game and update the help screen to include the new controls. 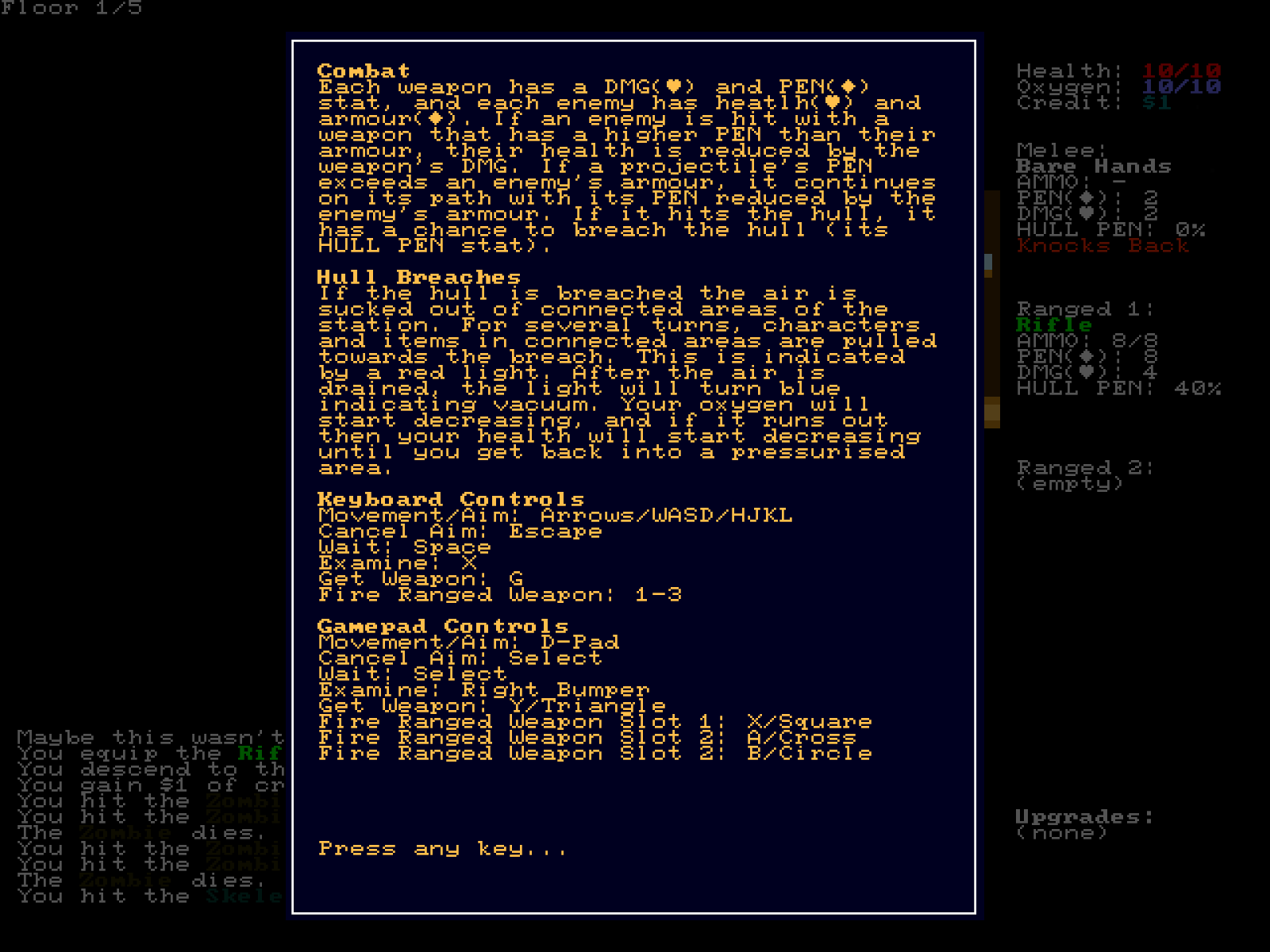 I also fleshed out the help screen to include some instructions on how to play the game. Hopefully there is a “Wall of Text” metric when judging this year’s submissions.

This year I employed the help of a musically-talented friend to compose the soundtrack and make sound effects in exchange for inclusion in the game’s credits.

Credits you say? Sounds like another chance to show off the menu I’m so obsessed with… 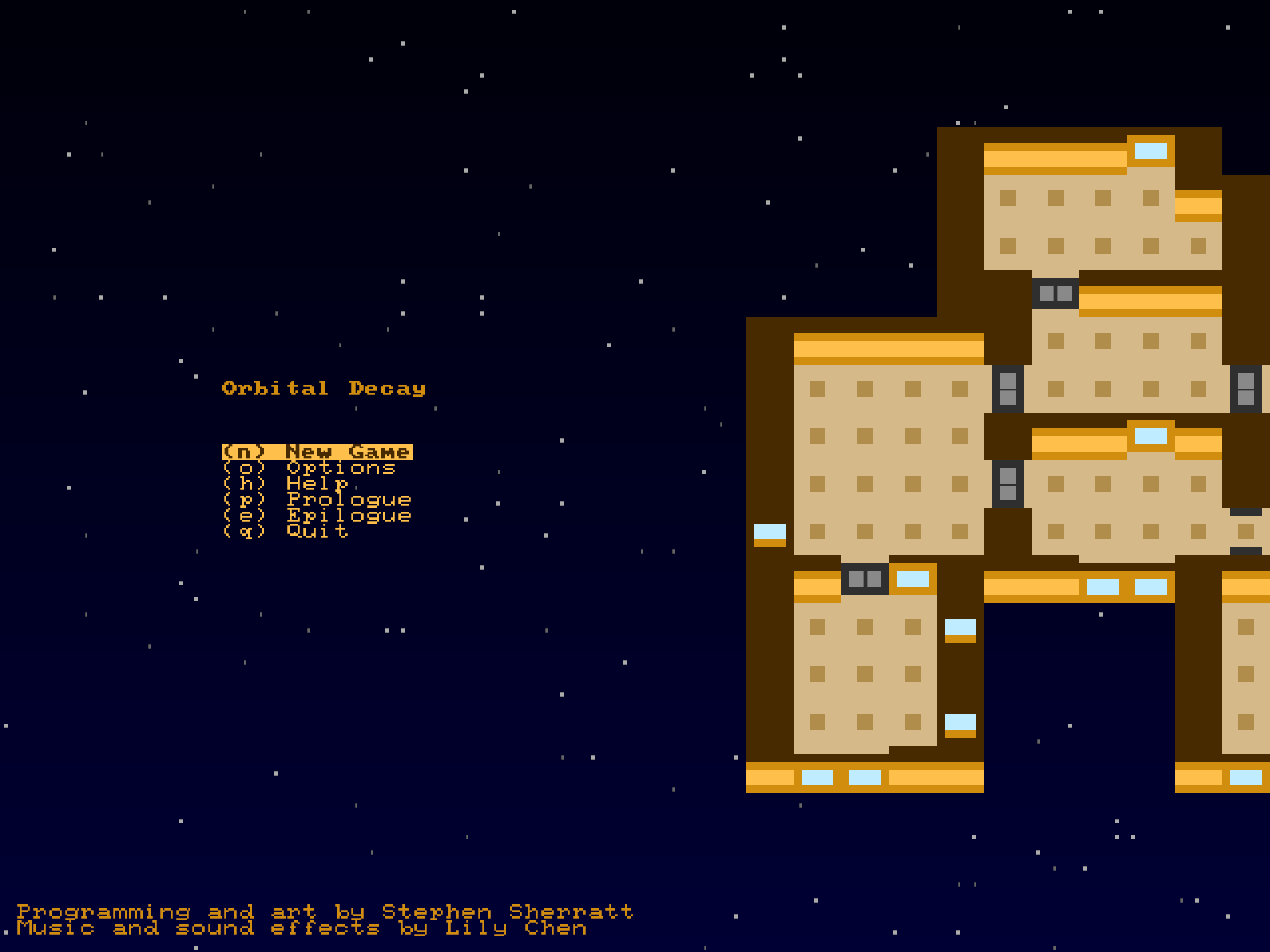 There are 6 tracks in total: Ambient music for the menu, 3 tracks that play during gameplay, and two end text songs (“Why two?” you ask - you’ll have to beat the game to find out!).

Also there are over 10 different sound effects for weapons and other events in the game. This is the first game I’ve made with sound effects, and they make it feel more fun. Which is terrifying! We think we enjoy games for the challenging strategic and tactical decisions, but it turns out we’re actually just children who get amused when we press a button and a thing lights up and makes a sound!

So this game has lots of things that light up and make sounds as well as what I hope are challenging strategic and tactical decisions!

One last feature before I start focussing on play-testing and balance. I promise!

This is a map terminal. It is currently locked. 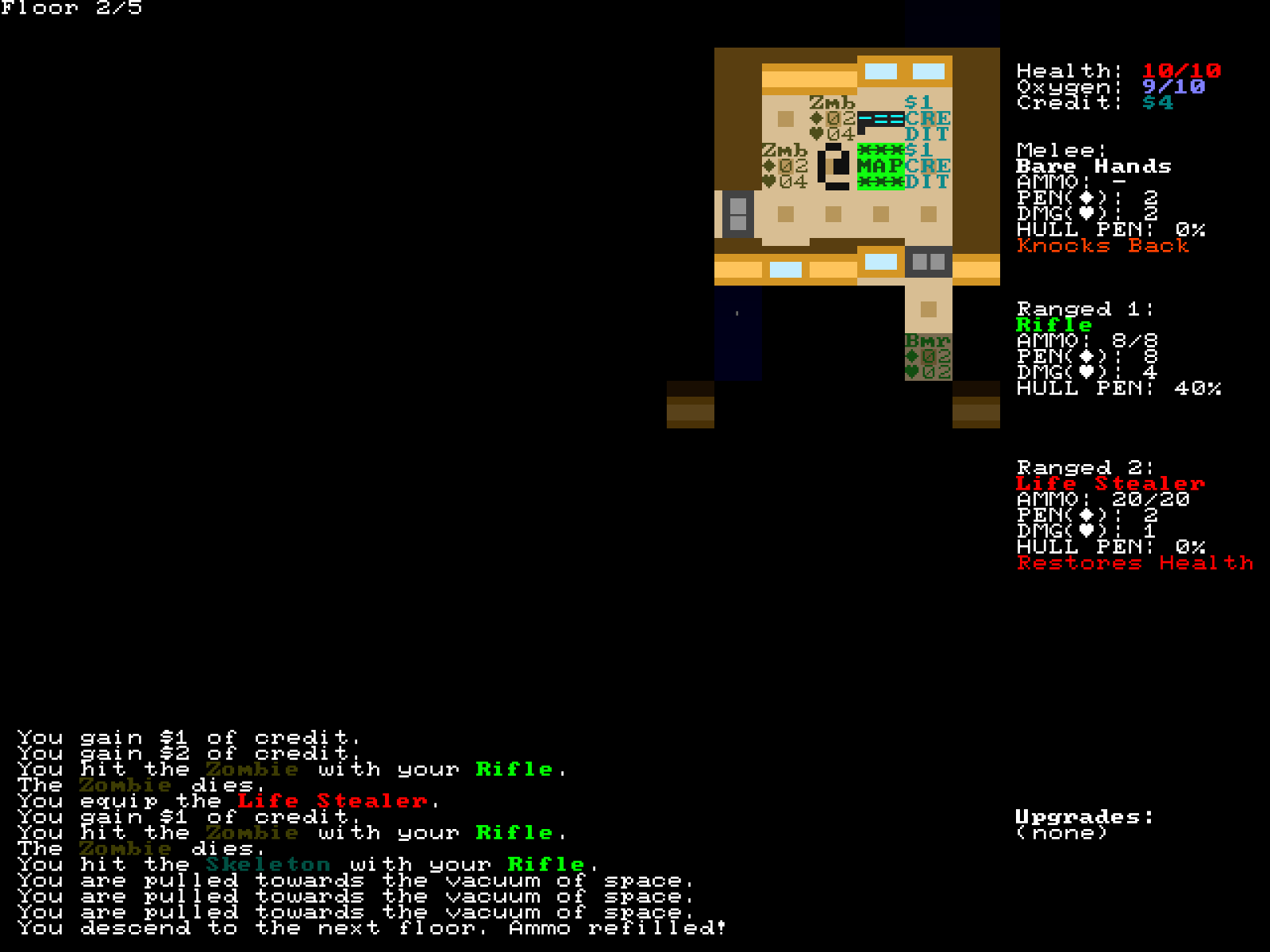 Bumping into it, you are prompted to pay to unlock it. 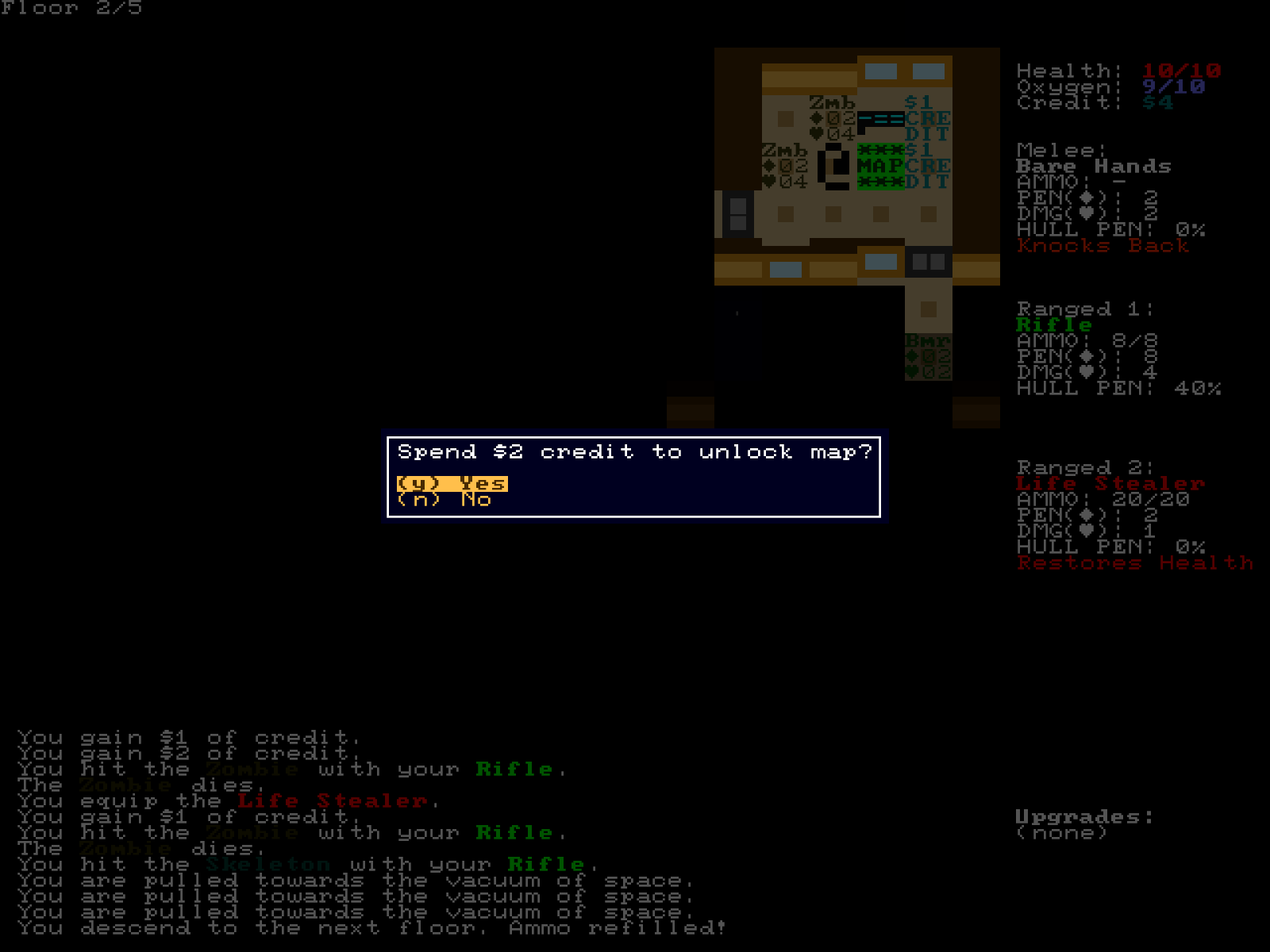 Should you agree, the terminal is unlocked. The *** is removed and you can now enter the cell. 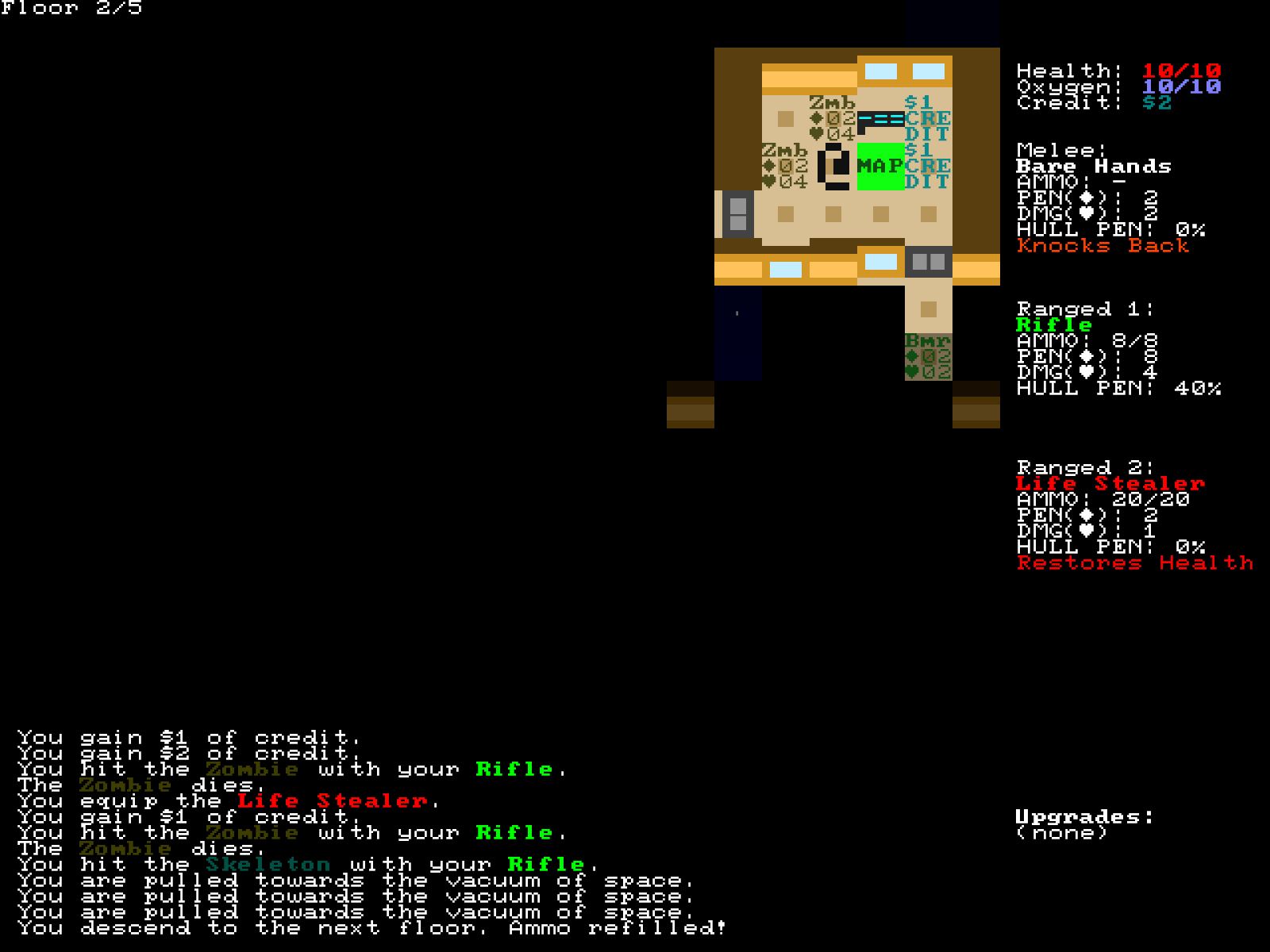 The layout of the ship, as well as the location of items and enemies is revealed to you! Behind the scenes this is repurposing the “omniscience” debugging mode in the vision system.

Bask in the glory of the space-gradient once again! 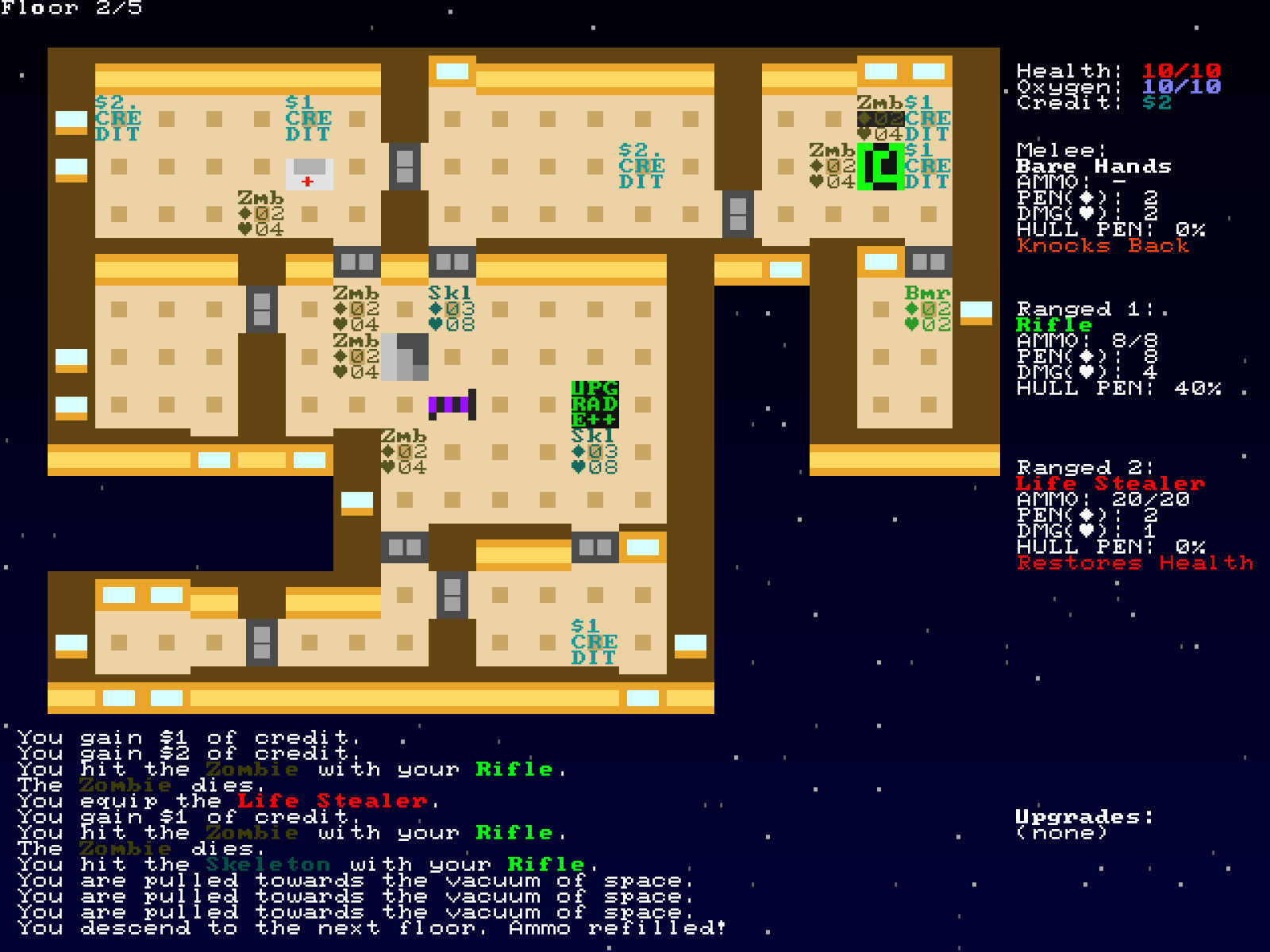 When you leave the cell, your omniscience stops, but you remember the layout. 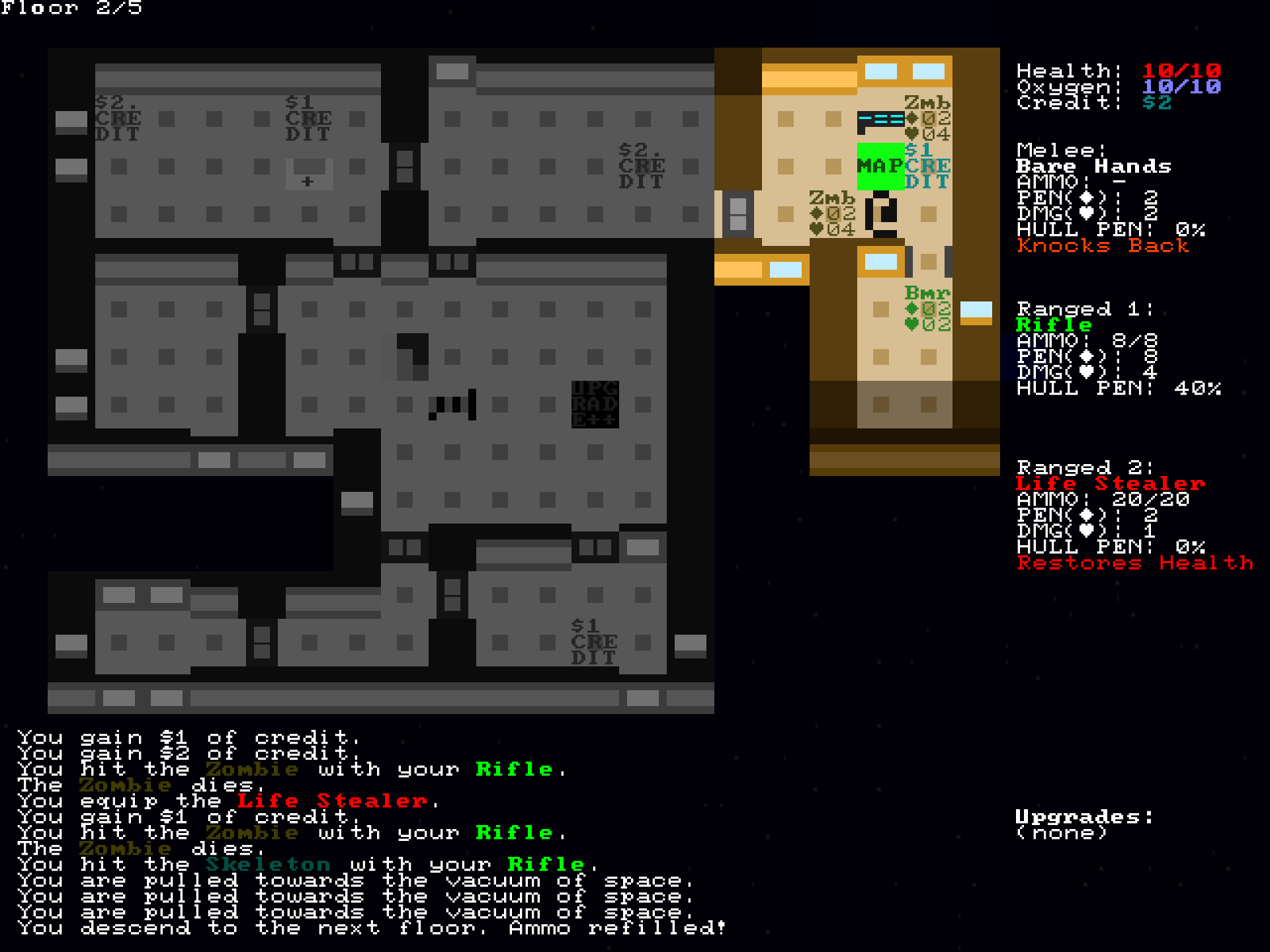 You can always go back to the cell to check the map again - it’s now unlocked forever.

I spent some time playing the game (with an XBox One controller!) and made the following changes as a result:

I’m really happy with the “skeletons are food” idea. Many traditional roguelikes had a concept known as the “food clock” to incentivise the player to make progress. Each floor of the dungeon would have a finite supply of food, and the player would get hungry over time. Spend too long on one floor, and you’ll exhaust the food supply and need to move on. Grinding on the same floor for ages is boring but players tend to do this anyway if it’s mechanically-beneficial, and the food clock helped break this cycle. In Orbital Decay, skeletons play this role instead! They are immortal unless you cause them to get sucked into space, and you’ll run out of ammo or health if you kill and re-kill them too many times. So maybe it’s more correct to say that “ammo is food” but it doesn’t have the same “what is he even talking about” ring to it as “skeletons are food” so I’m going to keep saying that.

Screenshots from my complete playthrough 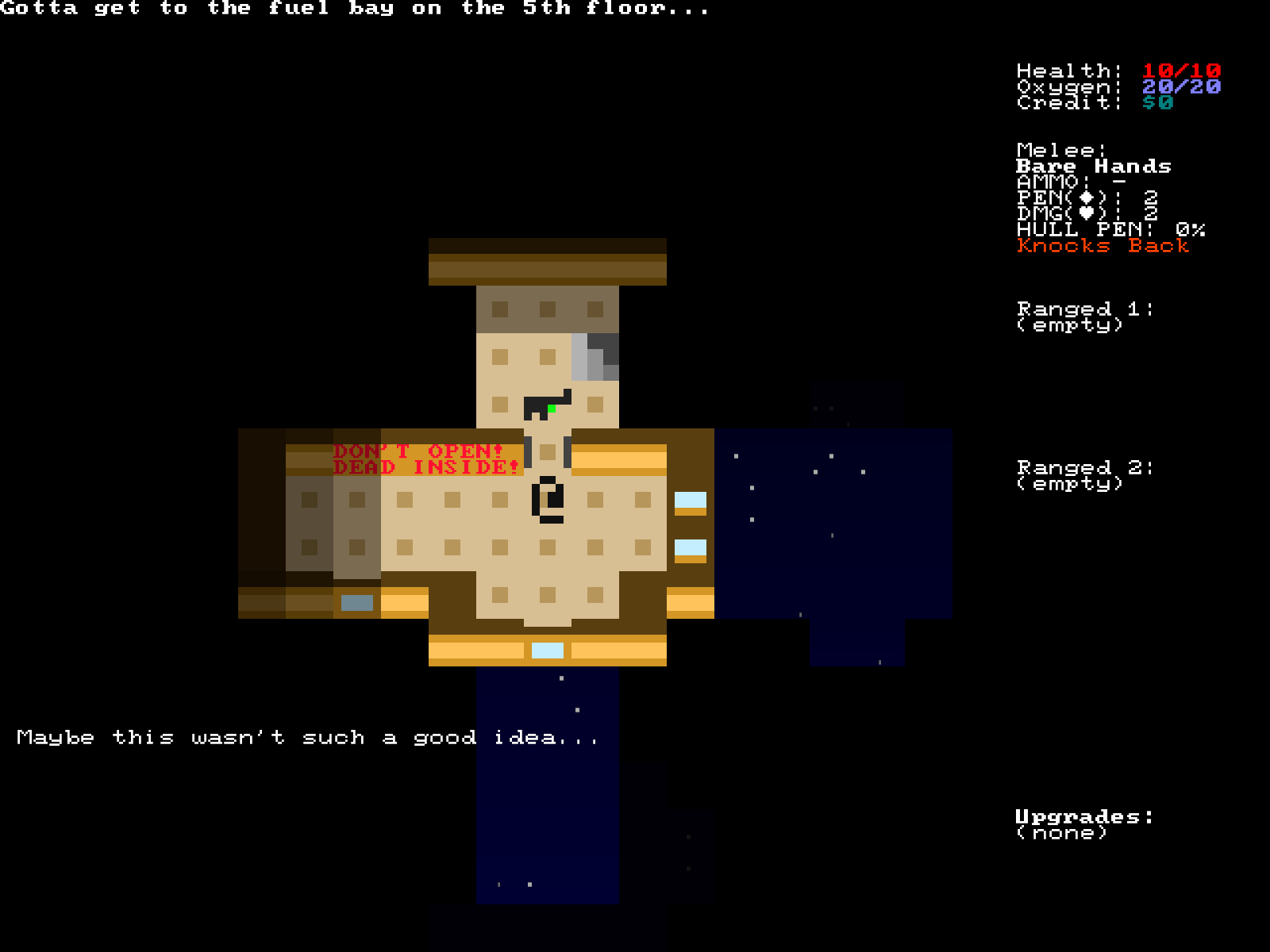 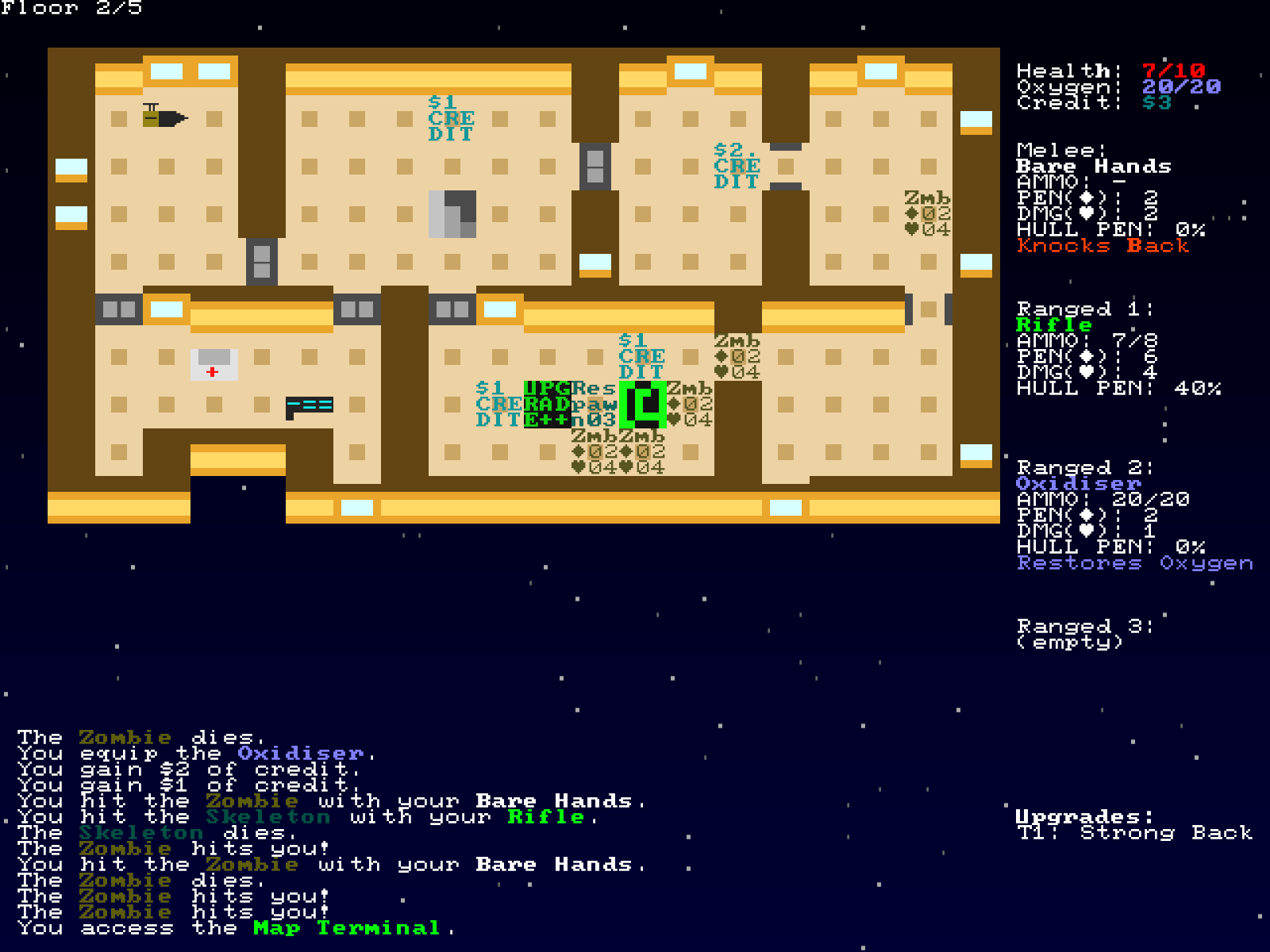 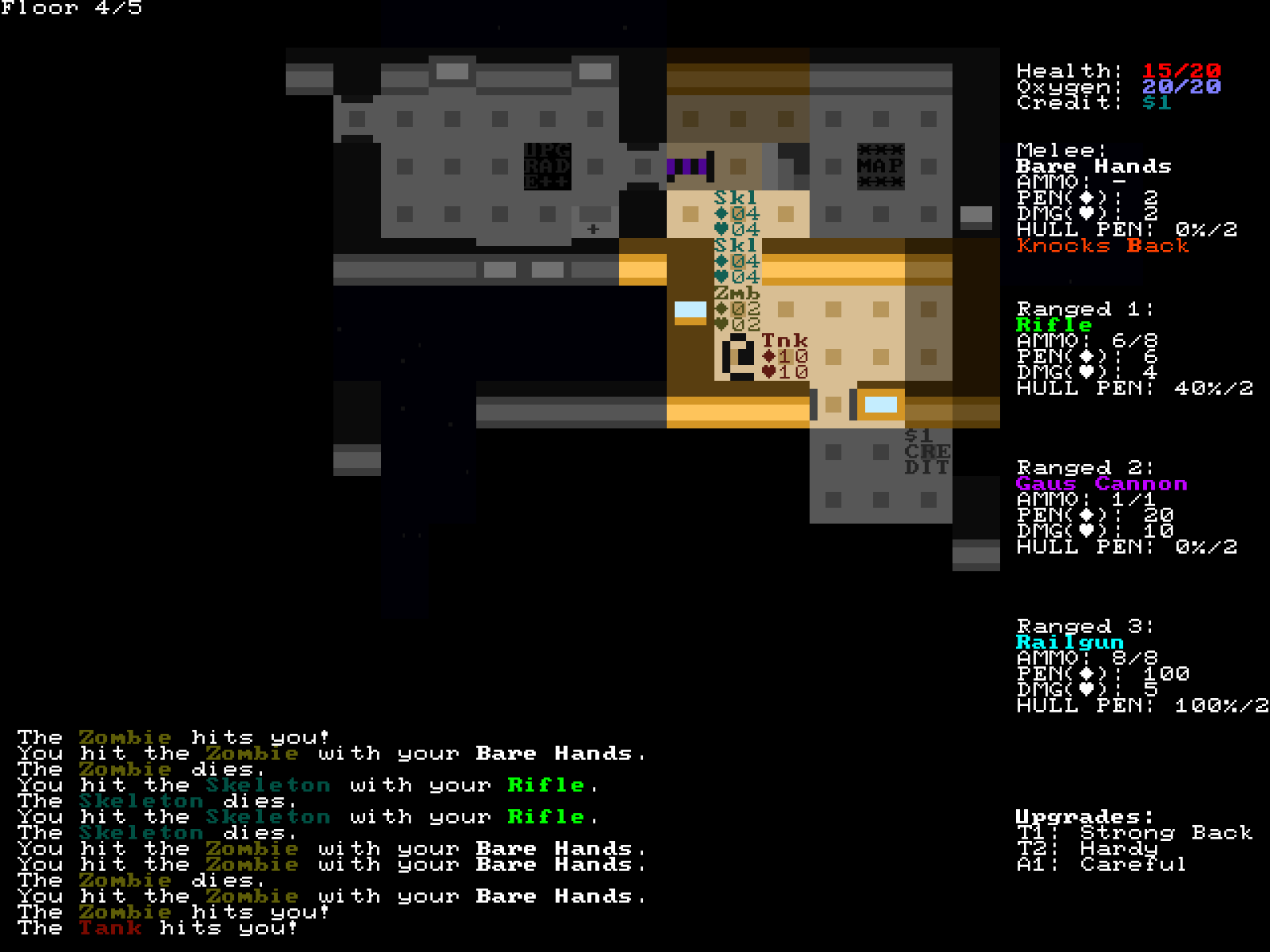 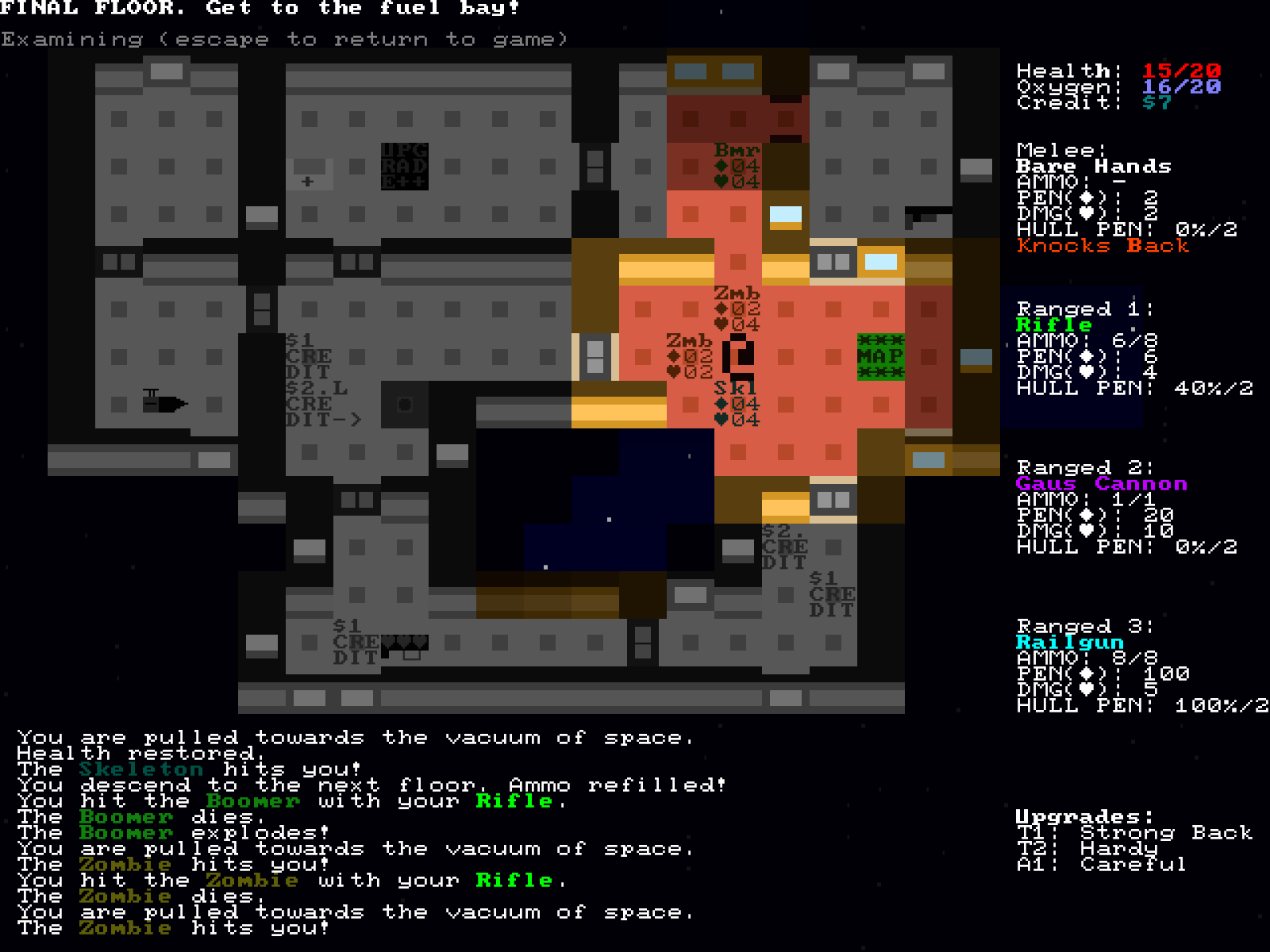 That trusty rifle saw me all the way to the end. Perhaps I was too hasty to remove it from the weapon spawn pool. I’ll also add the shotgun back to the list of possible starter guns.

In preparation for uploading to itch.io, I’m recording screenshots during all my play-tests. 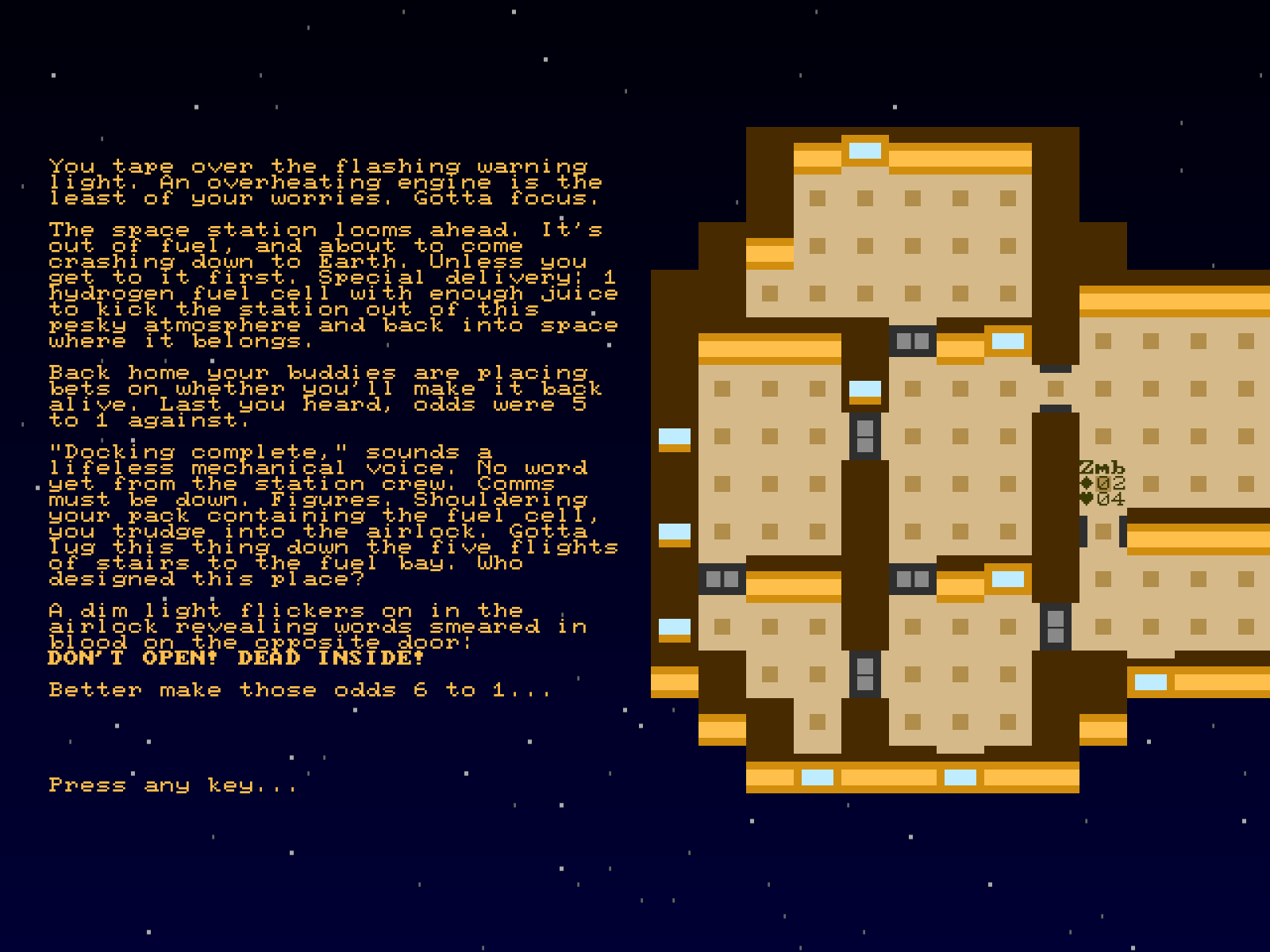 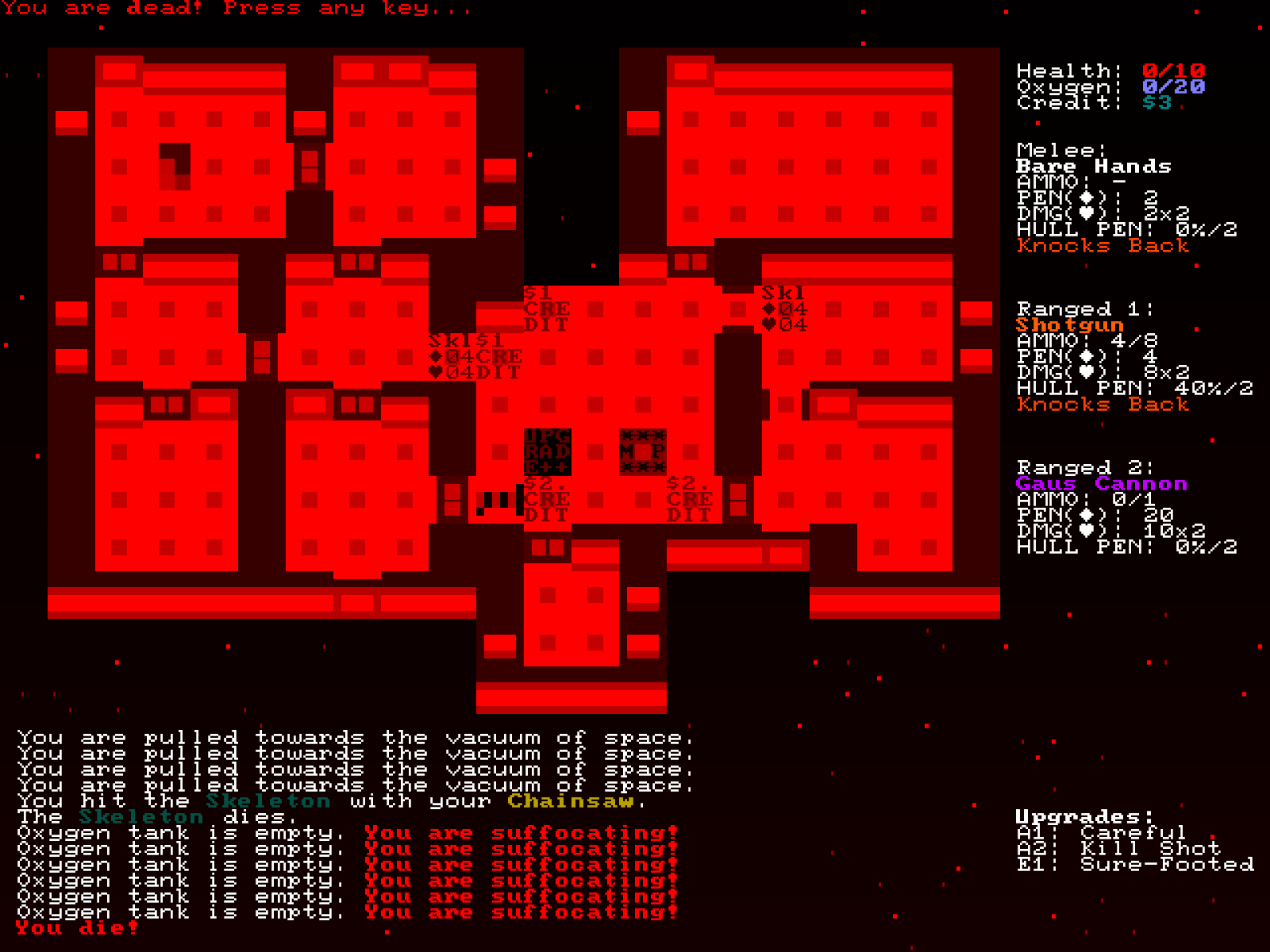 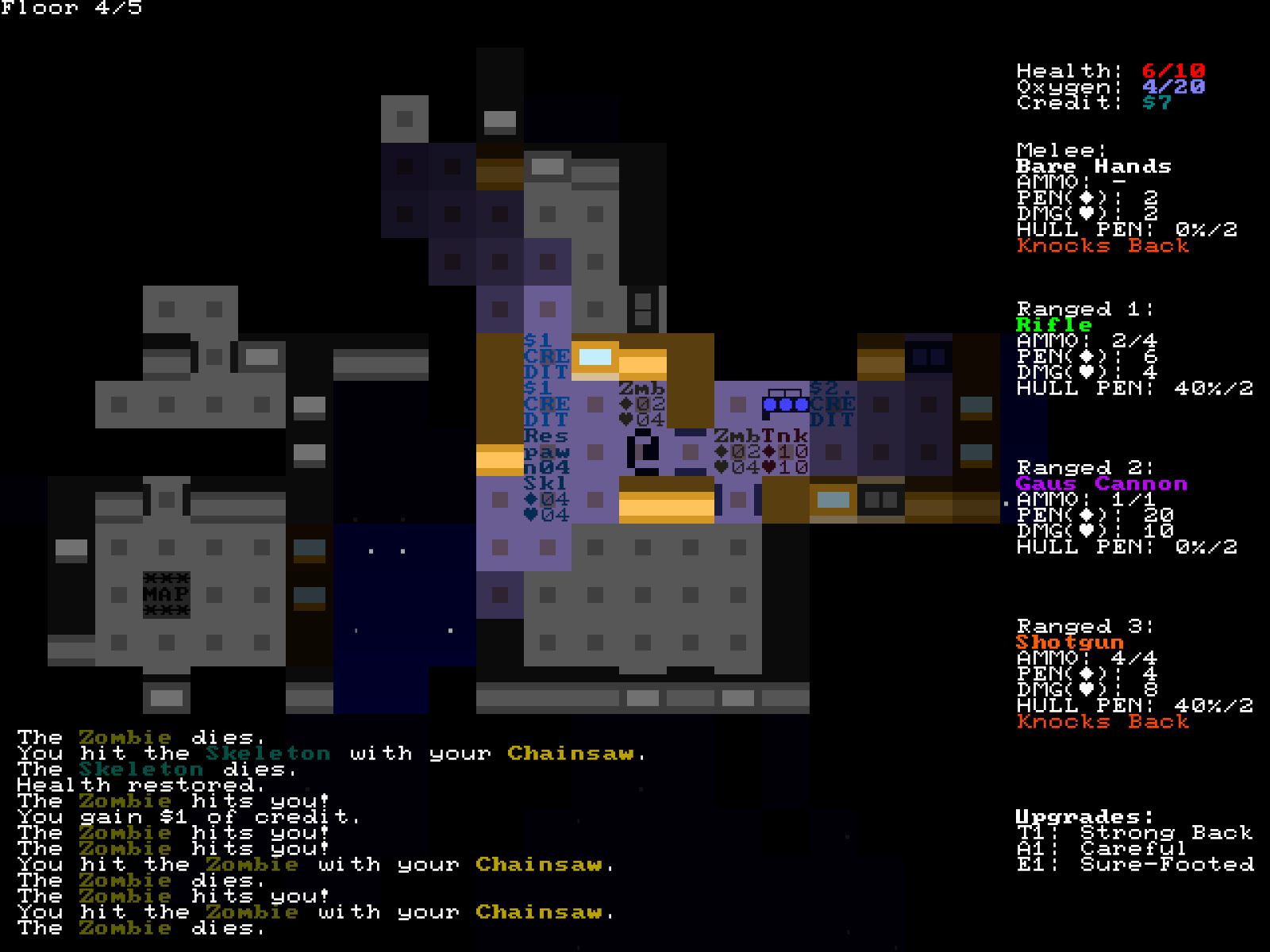 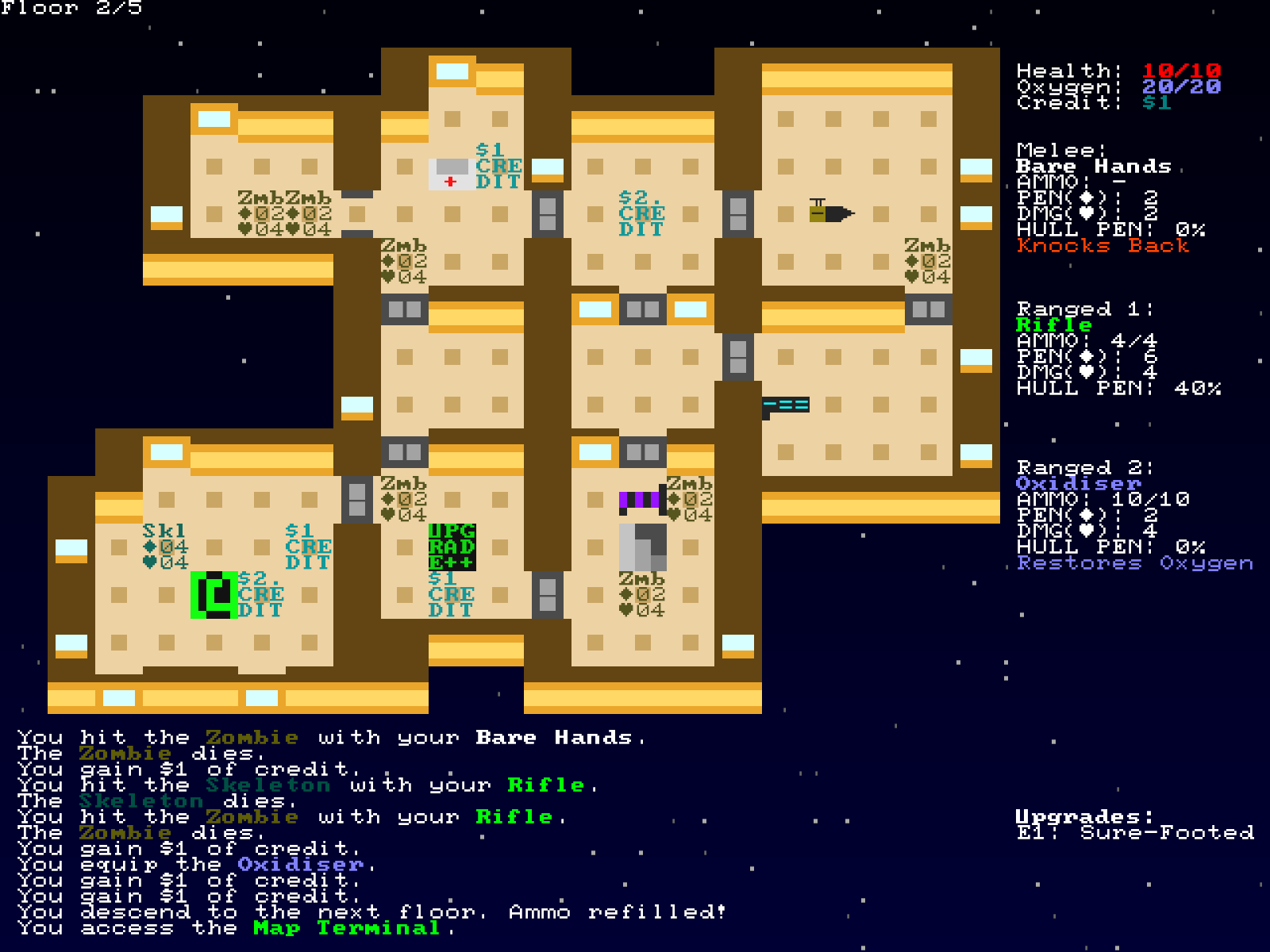 At first I used the map on this floor to test that I didn’t break the map mechanic with a last-minute 11th hour change (I didn’t), but I spotted a nice bit of accidental synergy between the map mechanic and boomer enemy. It is bad to kill boomers when they are near the hull because they explode and destroy the hull. It’s much safer to kill them somewhere where the only walls that they destroy are internal.

And for only $2 credit you can reveal the layout of the level and carefully plan out your approach. 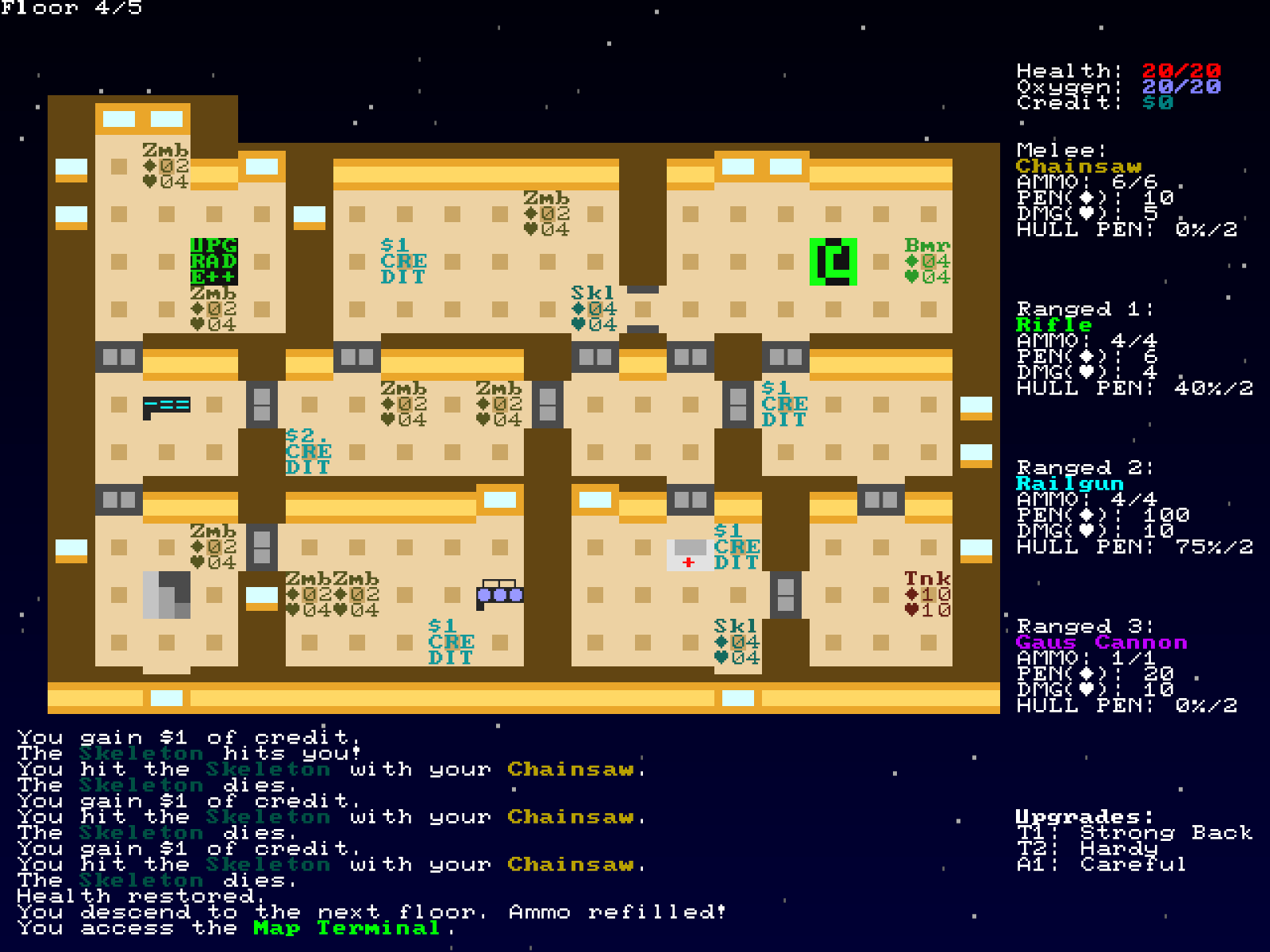 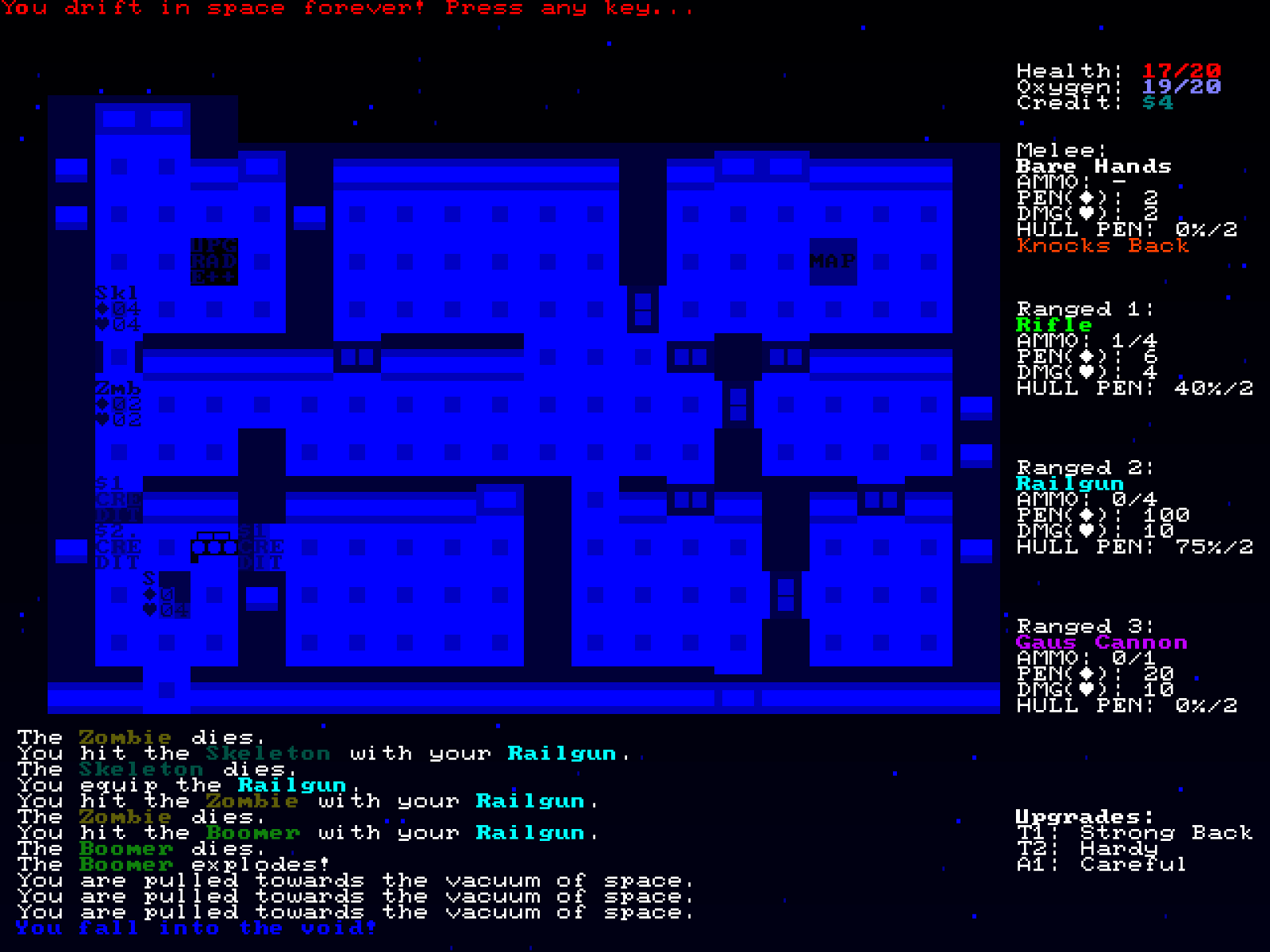 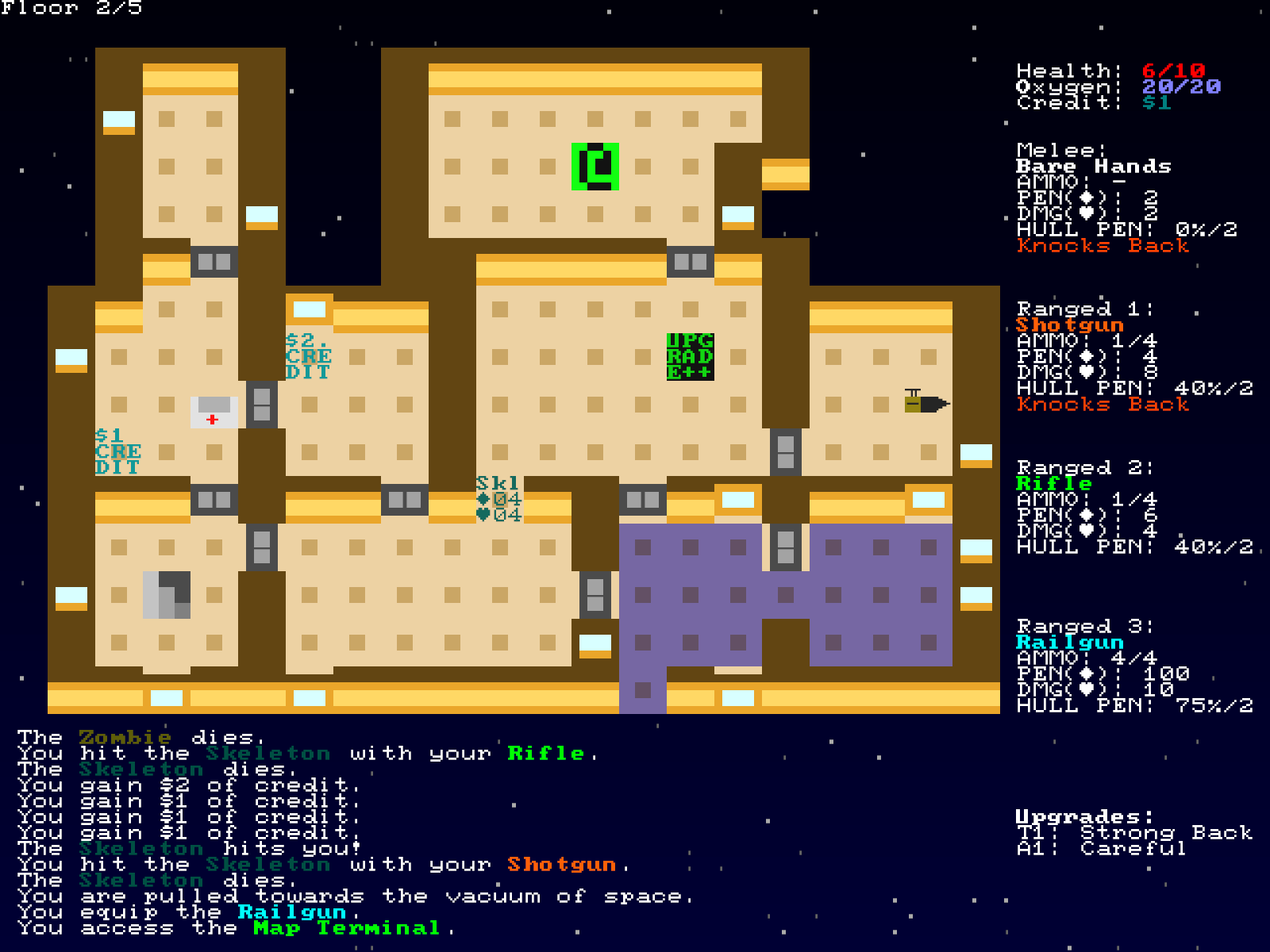 Through a rare confluence of the “Push Back” mechanic and skeletons turning into skeleton spawners upon death, it’s possible to end up with the spawner stuck in a wall. Eventually a skeleton appears, also stuck in the wall, and there they remain. 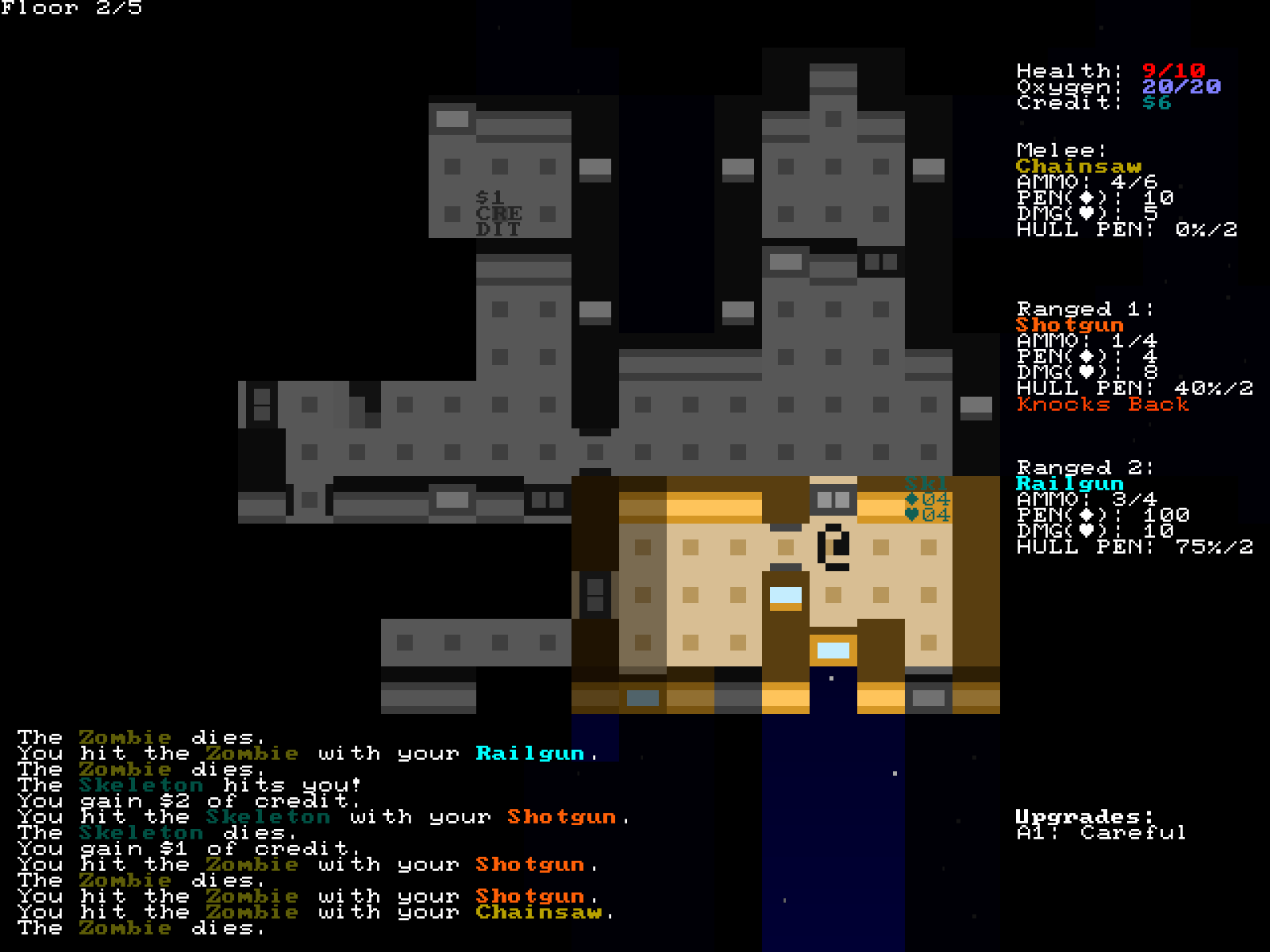 I’m gonna let this one slide! Nothing to do with the looming deadline or the fact that it’s 3:30am as I write this. If players can use this bu…ahem…mechanic to their favour, more power to them!

On the final night of 7DRL

This is one of the few nights of the year when I permit myself coffee at night. The interest rate on technical debt becomes negative and I write some of the worst, most pragmatic code I’ve ever written. The paint on the copy and paste keys of my keyboard becomes worn.

It’s typical to wait until the end of the week to playtest. Otherwise you wouldn’t have a game to playtest. But this means that by the time that you’re turning the knobs to make the game challenging but beatable, you’re so sleep deprived and exhausted that your ability to face the challenges is diminished somewhat. Does this mean that all 7DRLs are imbalanced in favour of the player? Or do developers account for this by making their games too hard to beat in their end-of-7DRL state, knowing that the game will become winnable once their faculties return.